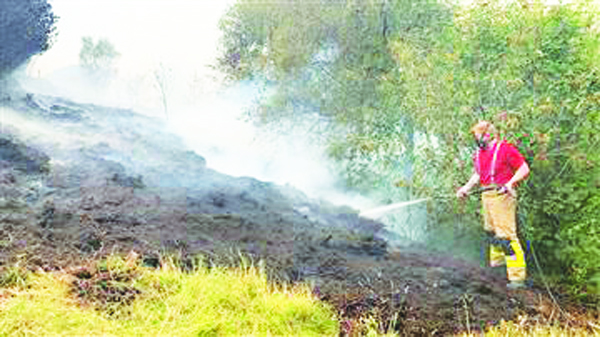 Firefighters were still at the scene of a blaze on land at Mow Cop yesterday morning (Wednesday), 18 hours after the alarm was raised.

During Tuesday’s heatwave they worked in searing temperatures to prevent the blaze from spreading to properties.

At one stage the fire, off Castle Road, was “rapidly spreading out of control”.

The first call to Cheshire Fire and Rescue Service was made at 2.50pm and related to a blaze involving a shed, which then spread to nearby land.

Six fire engines were sent to the scene along with additional relief crews.

A water shuttle was set up to get water to the scene and firefighters used hoses and beaters to extinguish the blaze and to prevent it from spreading.

By 6.10pm on Tuesday water jets were being used to protect property and firefighters were using an Agrocat, a tracked vehicle used to reach off-road areas.

By this stage crews were being rotated in the baking conditions to ensure firefighters’ safety.

At 9.15am yesterday the fire service reported that “good progress” was being made and that relief pumps from Crewe and Macclesfield had taken over at the scene.

They were continuing to damp down hot spots of fire and monitor the incident.

Brewery showcasing the art of beer-making