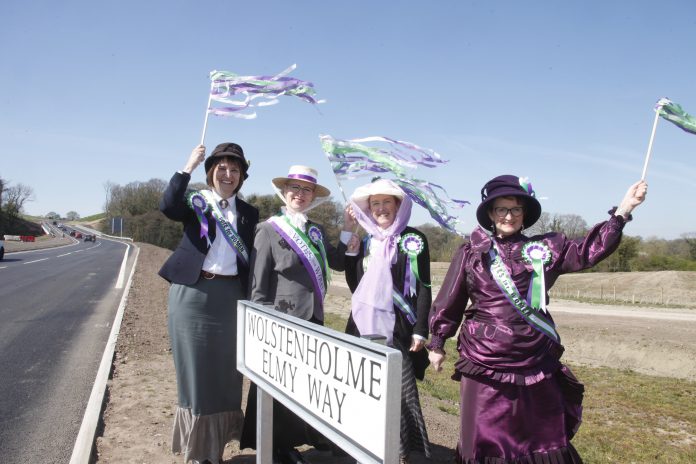 There were no bumps along the way for the official opening of Congleton’s new £90m link road as campaigners welcomed the “engineering achievement” that is hoped will put a pioneering suffragist on the map.

Council bosses said they were “proud” to see the project, almost a decade in the making, completed as a cavalcade of classic cars headed along the 5.5km route – newly christened Wolstenholme Elmy Way.

It has been named after Congleton’s own suffragist, Elizabeth Wolstenholme Elmy, who lived in the town from 1874 to 1928 and is considered one of the most important figures in the national women’s rights movement, despite being largely written out of history until recently.

As well as honouring the trailblazing campaigner, the link road is expected to reduce congestion by taking traffic away from the town centre. The new route joins the A534 Sandbach Road to the west and the A536 Macclesfield Road to the north. It is anticipated that this will improve travel between Congleton and Macclesfield.

Having opened at the weekend exclusively for pedestrians, cyclists and horse riders, the route opened to general traffic at lunchtime on Monday following a cavalcade of classic cars.

What started as an empty expanse of black tarmac was quickly transformed by a colourful display of vehicles whose drivers and passengers waved to those who had turned out for the occasion.

One council boss who watched the culmination of the project this week told the Chronicle that the pandemic struck at a “bad time” for Graham, the company that built the road, and that this was the biggest challenge the road builders faced during construction that began in 2019.

Paul Griffiths, Cheshire East Council’s project manager, said: “It’s really brilliant. I am very proud. I came down over the weekend with my wife and she was quite tearful because we have experienced the highs and lows of the project together over the years.

“I have to say, when we first started, we were quite sceptical that it would get done, but we had some strong political leadership and we worked alongside the local plan to get the project completed.

“During construction, the pandemic really arrived at a bad time for us. It began in March last year when we were just about to start the main earth works.

“Luckily, we had great weather and we took the decision that we would push on as much as we safely could. We wouldn’t be opening this new road today if we didn’t carry on. There are always bumps in the road, but hopefully not on this one!”

Frank Jordan, the council’s deputy chief executive, was on hand to cut the ribbon across the road prior to the parade of classic cars.

He said: “We’re really excited to get this done because it has been nine years in the planning. What the council has been particularly proud of is bringing it all together, and we have had a fantastic partner with Graham.

“I cycled it on Saturday, and you could see the benefits it will bring to the town, such as alleviating congestion. Previously, the through-traffic from Sandbach, Holmes Chapel and Macclesfield would have had to go into Congleton and sometimes that included HGVs so it was quite a heavy flow.

“It is a great engineering achievement.”

Among those in the parade of classic cars were members of Elizabeth’s Group, who have been campaigning for a statue of the suffragist in the town centre for three years.

Group members walked the length of the road in 19th century attire at the weekend, before cruising down it in an open-topped 1970s Daimler limousine on Monday.
Group chair Susan Munro said: “We had a lovely day walking in groups of six from Eaton to the other end of the road on Sunday.

“People were telling us that they knew who Elizabeth was and we thought, thank goodness! Three years ago nobody had heard of her, including me. We are really smug.

“The next big thing for us is the statue. We are less than a year away now so we need a big push for the last few donations. Just think what it is going to be like when we unveil it on International Women’s Day next year.”

Tonight (Thursday), members of Congleton Town Council will discuss where in the town they would like to see the statue erected.

Coun Kay Wesley, who represents the Women’s Equality Party on Congleton Town Council and who is also a trustee of Elizabeth’s Group, said: “We have got three alternative town centre locations that we are putting to the council. Hopefully, they will go for our preferred option which is right in the middle of the town.

“We have got the support of the police and the public for it. There have been a lot of people saying that Elizabeth should absolutely be in the middle of the town so that all the schoolchildren can come and look at her. It will really put Elizabeth and Congleton on the map.”

The 5.5km route opened this weekend for walkers and cyclists before its formal opening to traffic on Monday.

“We started planning for this project back in 2012, working on designs, routes and the lengthy process of raising the essential funding required. We contributed £24m to the project with the rest of the funding coming from developer contributions and importantly, a successful business case to Government which secured £50m.”

She added: “At the time, this was the largest capital project the council had put in place and delivering the scheme from concept to commencement in just seven years, with completion predicted in a further two years, has been a remarkably rapid achievement when such projects usually take upwards of 20 years.

“It would not have been possible without the support of Fiona Bruce, who successfully championed this project with Government.”