The town has first station on line to be dementia friendly 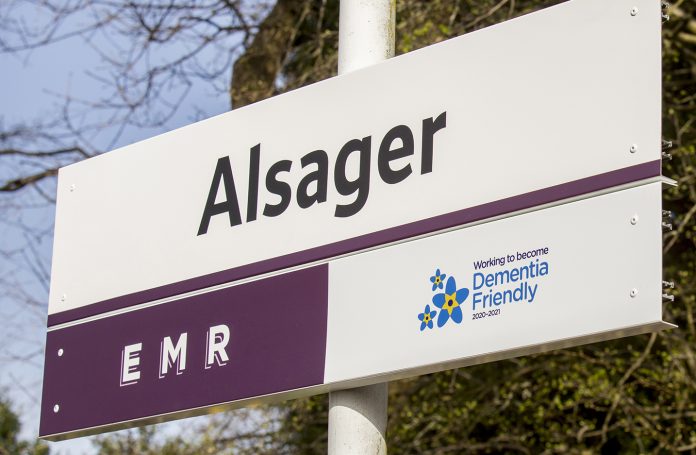 It is hoped a recent revamp of Alsager station will make it a less daunting prospect for people with dementia and encourage more people to visit the town.

East Midlands Railway has teamed up with Alsager Partnership to give the town’s station a facelift, making it the first station on the Derby to Crewe line to become Dementia Friendly.

The project will help support Alsager’s Dementia Friendly status and has seen improvements to help people with dementia including new easy recognisable signage and wayfinding. The scheme aligns with the rail company’s new station environment guidelines.

The organisations have worked together to develop new signage which follows best practice when trying to direct people living with dementia around busy environments.

To help these passengers, the signage includes easily recognisable symbols and clear colour contrasts. The information is not surrounded by other distracting information.

Alsager is already recognised as a Dementia Friendly community and each year works towards retaining the status by making improvements. This year it chose to focus on the railway station.

Alsager Railway Station was granted Dementia Friendly status in 2020. Since then, work has continued with the North Staffs Community Rail Partnership and East Midland Railway to replace and add to current signage, to make navigating the station easier for people living with dementia and their carers.

Lisa Angus, transition and projects director at East Midlands Railway, said the company was “delighted” to be able to support the work at Alsager.

She said: “We have recently reviewed the way we use signage and how we create environments at our stations. It was very fitting to be able to support this project which shares many of our central themes and ideas.

“We hope the improvements will make life easier for people living with dementia and their carers when they catch one of our trains from Alsager.”

The aim of Dementia Friendly Communities is to help people living with dementia, and their carers, to feel safe, supported and involved in community life. This includes raising awareness and understanding and improving services across all sectors.

Kath Reader, of Alsager Partnership, dementia-friendly project lead, said: “We are delighted with the new signage installed by EMR and hope it will encourage more people living with dementia and their carers to feel confident about using the station.

“We hope many people will visit the town and take the Dementia Friendly walk through Milton Park.”

Alsager Partnership has produced a circular map from the station, taking in Milton Park and places of interest, with snippets of local history. Hard copies will be available.

The station is well looked after by its team of adopters, who ensure that it always looks its best. The volunteers have won several awards for their efforts.