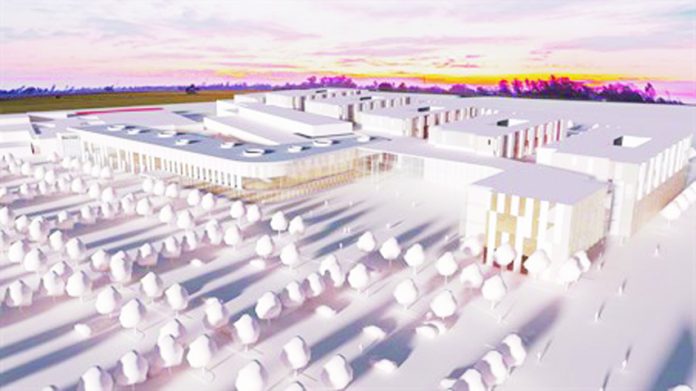 Plans for the £663m redevelopment of Leighton Hospital in Crewe have moved a step closer, after a bid for funding was formally submitted to the department of health and social care.

The Mid Cheshire NHS Foundation Trust wants to replace the current ageing hospital with a state-of-the-art facility that would transform the healthcare of the people of Cheshire and across the North West of England.

Leighton Hospital was built in the 1970s and the type of materials used has resulted in “significant” spending to resolve safety risks, primarily reinforced concrete planks in the roof and walls, known as RAAC planks.

James Sumner, chief executive of the Mid Cheshire Trust, said: “Our vision for the new Leighton is for a carbon neutral facility that will play a vital role at the heart of the community and support the delivery of a new clinical model – a blueprint for providing care both in and out of hospital.”

At a time of pressure on public finances, independent analysis shows the projected new build cost of £663m is around £100m less than the continued refurbishment of Leighton over the next 15 years.

Murray Luckas, the trust’s medical director, added: “A new hospital provides a unique opportunity to transform the experience of both patients and staff, working closely with our many partners.

“Our aim is to ensure that digital innovation is at the forefront of health services designed to tackle inequalities and meet the needs of a growing and ageing population.”

The trust, which employs nearly 5,000 people and serves a population of 300,000, has a commitment to enhance its clinical facilities, with a new emergency department due to open by the end of the year. Continued investment is a key component of a new five-year trust strategy, which will be unveiled this month.

A final decision on the funding bid, via the Government’s new hospital programme, is expected by next spring.