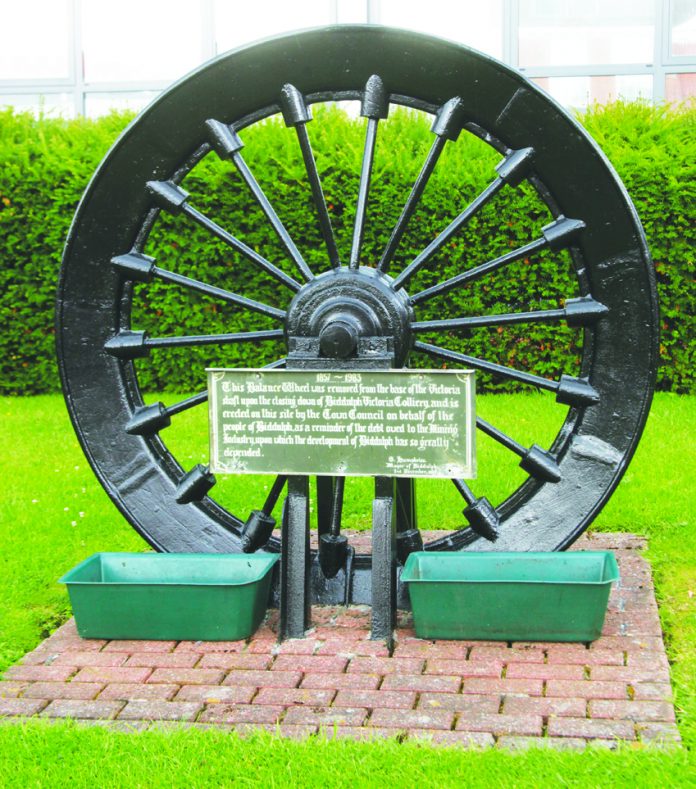 A decision on whether to hold a consultation on the moving of the miners’ wheel from outside Biddulph Town Hall has been deferred.

Town councillors were asked to consider “consultation options” for the relocation of the balance wheel at a meeting of the Finance and Policy Committee last Tuesday but agreed that more time was needed to receive a petition against the move.

The wheel once stood at the foot of the lift shaft at the town’s Victoria Colliery. It has served as a monument to Biddulph’s mining community since 1983 when it was placed outside the town hall by George Humphreys, who worked down the pit, during his year as town mayor.

Couns voted earlier this year to move the wheel to the Victoria Memorial Park on Station Road, next to the Methodist church, where a monument would comprise three circles – one containing flowers, one a fountain and one with the miners’ wheel standing on a plinth.

The base would be surrounded by bricks, with each available for purchase by relatives of miners whose names would be inscribed on them.

But following a backlash against plans to remove the wheel, which included a petition that had more than 1,000 signatures, Independent Coun John Jones said that he was open to a “face-to-face public consultation” if it could be proved the project was “truly not wanted”.

His proposal had been due to be considered at last Tuesday’s meeting, but the discussion has now been moved to next week.

Coun Jones said: “The item was deferred. We needed time to receive the petition that has been put together, which cannot be done until the next full council meeting on Tuesday. Then it has to be analysed properly before we bring it back and decide what we are going to do.

“I am still keen, if there is a genuine objection, to do a little bit more consultation.”
At the same meeting, councillors debated the authority’s new petitions policy that will determine the rules by which a petition can be accepted. The petition on the miners’ wheel relocation will be exempt from the new policy.

Coun Jones explained: “It will determine what is accepted in the future, but the petition that has already been handed in will not be subject to that policy because it would be unfair to accept it, then bring in a policy that says the petition does not comply with it.”