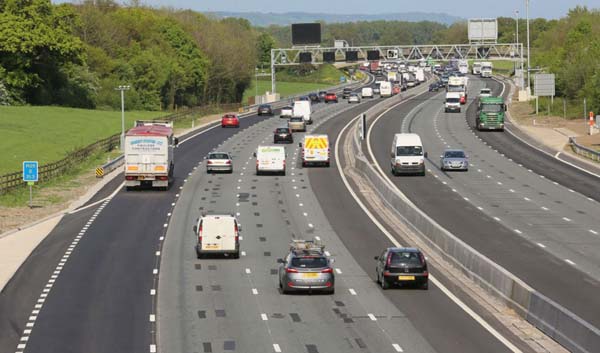 The death toll on smart motorways has risen to a record high, according to figures held back from publication by the department of transport.

The figures show there were there were 14 fatalities in 2019 on motorways where hard shoulders operated as full-time or part-time traffic lanes – as along the M6 through the Sandbach and Holmes Chapel area – according to data collected by the DfT but not published in its annual report on road casualties.

The figures were taken from last September’s Stats-19 accident database, used by the DfT for its annual report, with input from RoadSafetyAnalysis, a consultancy.

The Sunday Times, which broke the story, said that data had been collected by the department for transport but not published in its annual report on road casualties.

There were 11 deaths on smart motorways in 2018 and five in 2017, the paper said.
It pointed out that the number of fatalities was rising faster than the network was expanding.

The total number of fatalities on motorways in Great Britain fell to 105 in 2019.
Last month, a coroner investigating a smart motorway death referred Highways England to the Crown Prosecution Service, to consider whether corporate manslaughter charges were appropriate.

Nargis Begum, (62), of Sheffield, died on a stretch of the M1 without a hard shoulder in south Yorkshire, near Woodhall services, in September 2018. She had left a broken-down Nissan Qashqai and was waiting for help when another vehicle collided with the Nissan, causing it to plough into her.

At a pre-inquest review hearing at Doncaster coroner’s court on Thursday, senior coroner Nicola Mundy said the length of time the stationary vehicle went undetected was among the reasons for her decision.

The BBC’s Panorama last year found that 38 people had been killed on smart motorways over the last five years.

Freedom of information requests sent by the BBC to Highways England revealed that on one section of the M25 the number of near misses had risen 20-fold since the hard shoulder was removed in April 2014.

A “near miss” is described as an incident with ‘the potential to cause injury or ill health’.

The idea behind the smart motorway programme was to increase capacity without the cost of building new routes and to create more free-flowing traffic.

The smart motorway programme has several variations. Some permanently remove the hard shoulder, meaning drivers might break down in live lanes of fast-moving traffic, others do this on a dynamic basis where the shoulder would sometimes be closed off and sometimes open to traffic.

Highways England has recently said it would scrap the so-called dynamic hard shoulders.

The smart motorways use technology to help detect vehicles that have broken down or been involved in collisions in moving traffic but there have been fears it is not accurate enough.

“What the evidence shows is that in most ways, smart motorways are as safe as, or safer than, the conventional ones. But not in every way.” He announced a series of measures, including more frequent emergency stopping places with better signage and £5m to improve public information and awareness about smart motorways and what to do in an emergency.

The number of miles driven on motorways in England has increased by 23% since 2000. A smart motorway can carry 1,600 additional vehicles an hour in each direction and studies on the M25 have shown that these roads have enabled an additional 11,000 journeys a day.

The report from Mr Shapps said that on the M6 junctions 16 to 19 smart motorway, through Sandbach and Crewe, the average commute over a week had reduced by 40 minutes and journey reliability had “demonstrably improved”.

Motorways are comparatively the safest major roads to travel on. In 2018, motorways carried 21% of the road traffic but had only 6% of fatal collisions.