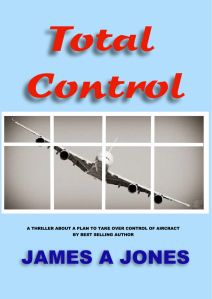 A Sandbach author has launched his latest book based on the missing Malaysia Airlines Flight 370, which disappeared in 2014.

Although the idea comes from a true story, the book is a work of fiction and author James Alfredo Jones, (82), believes writing that way made it possible to tell his version without the US government “jumping all over you”.

He said: “The American government doesn’t like being accused of anything and several people have tried to edge towards an explanation of what happened to Malaysia Airlines Flight 370.”

The plane disappeared on 8th March 2014, en route from Kuala Lumpur to Beijing, with 239 people on board. Despite one of the biggest searches in history, no trace has ever been found.

The crew of the Boeing 777-200ER aircraft last communicated with air traffic control (ATC) around 38 minutes after take-off when the flight was over the South China Sea.

Mr Jones said: “This book explains how it disappeared, but you can’t write it as non-fiction because they would jump all over you, so one of the ways is to write it as fiction.

“It’s like an elephant’s in the room, there’s a lot of people who understand what happened, but nobody’s put it in writing and that’s why I copyrighted it straight away.”

Mr Jones became an author 10 years ago and the plot for his latest work is something he can relate to as he holds a UK pilot’s licence.

Mr Jones had been due to fly around the world in a light plane with his wife Dorothy as a fund-raiser for the Alzheimer’s Society but following his involvement in a motorsport accident followed by the pandemic the trip was postponed.

The BBC intended to release a documentary about the trip which was to be called Around the World at 80.

The father-of-two is a big name in the motorsport industry and had enjoyed riding a dirt bike from the age of 17 through to 77, competing at events worldwide.

He competed in more than 1,000 motorsport events in his career and has travelled extensively with his wife which included a seven-year circumnavigation of the globe in a motorhome, when they visited 53 countries.

Mr Jones’ latest book can be purchased from his website, jamesajones.co.uk