Shoppers at ‘social supermarket’ ‘can hold their heads high’ 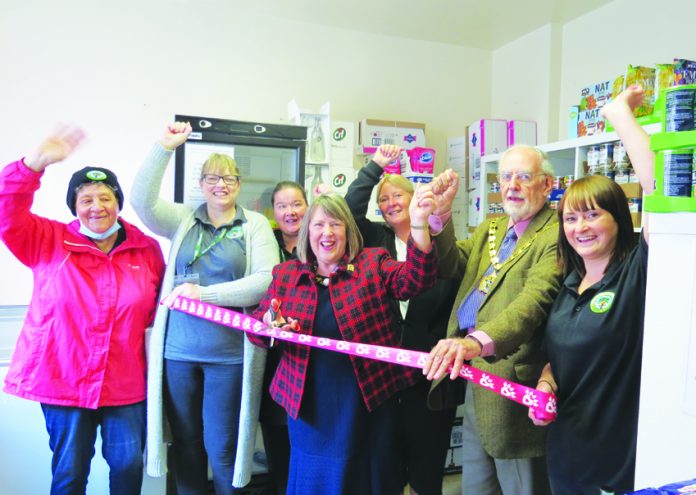 A “social supermarket” that began life in Biddulph has opened up in Congleton after realising that 15% of customers came from the town.

The Green Tree House project was launched in Biddulph five years ago to help households on low incomes but demand from people in the neighbouring town has increased.

Congleton’s social supermarket opened last Friday on Lawton Street and will help those living on the breadline with their weekly shops – people can purchase 10 items for £4.50.

The Green Tree House project in Biddulph attracted 340 members in nearly a year. Of those, volunteers discovered that almost 50 had registered with a Congleton postcode.

Sean Thompson, one of the charity’s directors, recently told the council’s Community and Environment Committee: “We noticed that we were getting Congleton postcodes coming to the supermarket in Biddulph, so we started putting feelers out about opening one here.

“Out of 340 members registered at the Biddulph social supermarket, 42 had postcodes registered in Congleton.

“A lot of people prefer to come to a social supermarket rather than a food bank because of the embarrassment that can come with it. I have been down that path myself and I found it uncomfortable.”

He added: “Feedback showed that people feel more comfortable in making a contribution for the food.”

Mr Thompson explained that there were other benefits to a service like the social supermarket, on top of alleviating the effects of poverty.

“When I was speaking to a PCSO in Biddulph, I was told that there was a gentleman who used to steal from Sainsbury’s, but when he started to use our food club, it stopped,” he said.

“Having the food club and making things affordable for people who are struggling is having a knock-on effect across the community.”

Thanks to donations from companies such as Kellogg’s and Warburtons, it is estimated that 10 items at the social supermarket would be £10 cheaper than if bought from a high street supermarket. Profits that are made at the shop go towards purchasing food for the following week.

The Green Tree House project is making use of a room offered rent-free by the LOL Foundation in Congleton, which supports army veterans but hopes to find somewhere with more space for customers in the future.

It estimates that the annual cost of operating will be £13,000 per year.

At a meeting of the town council’s Finance and Policy Committee on Thursday, the group was awarded £2,000, which will help to fund the social supermarket during its first eight weeks.

Congleton MP Fiona Bruce cut the ribbon to mark the opening on Friday in front of a backdrop of soup tins, cereal and household goods.

She said: “It has been a privilege to open the Green Tree House food club in Congleton today and to see how they are working together with the wonderful LOL foundation that has done so much in the community over many years.” Mrs Bruce dodged a question about whether she was concerned low-income constituents may have to rely on services like the social supermarket but said that it would provide “real value” for local people.

The Conservative MP said she had not been contacted by anyone who made use of similar services.

Women’s Equality Party Coun Kay Wesley was also at the opening. She said: “Clearly, national government plays a role in things like minimum wage and defining how people live.

“Poverty is not inevitable but designed-in by government.

“Perhaps Fiona Bruce might like to talk to her colleagues about how we can design out poverty so that we don’t need services like foodbanks or social supermarkets in future. But for the time being, what the Green Tree House group is doing is fantastic. They are a great bunch of volunteers.” She added: “This is a business model that respects people and gives them dignity; it says, just because you are on a low income does not necessarily mean that you need charity.

“This is not charity. It is about spending money on some low-cost items. You might not get the choice you get in a big supermarket, but it means that you can spend your money buying the things you need while holding your head high.

“It is sad that in Congleton we have people living in poverty, but this service is providing a vital lifeline.” The social supermarket is open on Wednesdays and Fridays from 10am to 2pm at 54, Lawton Street.