Half returns with new start on Elmy Way 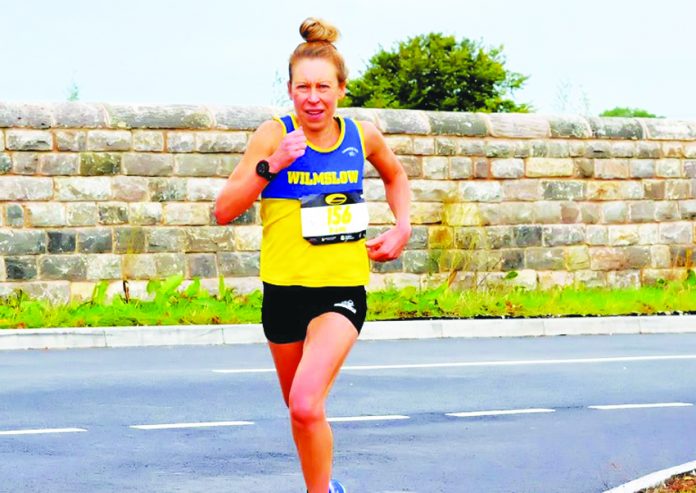 The first Sunday in October is clearly a good day to hold an endurance event, as London chose to move its marathon to the same day as its more illustrious partner – the Congleton Half. After missing out in 2020 due to the pandemic, the Congleton Half returned for its 37th outing on 3rd October.

New race director Stephen Canning and the race committee had used the enforced covid break to good effect by remodelling the starting arrangements with a move from Black Firs Lane up onto the new link road at the end of Back Lane.

The weather conditions for the runners and marshals was perfect – cool and overcast with just a hint of rain (which thankfully held off bar a few spitting episodes).

The race was started promptly at 9.30am by Congleton mayor Coun Denis Murphy, with 290 runners setting off behind the lead car from Blue Bell BMW on their half marathon journey around the local villages and hamlets of Somerford Booths, Marton, Lower Withington, Kermincham and Swettenham.

Out front, after the first few miles, the field quickly stretched out with the first three running their own individual races for the whole duration.

The first three men to complete the route were Stuart Doyle from Vale Royal in 1.18.10, Paul Sidwells from Run free in 1.19.51 and Thomas Minshall from Congleton’s Boalloy in 1.21.45.

This year, due to covid there was also on offer a “virtual” Congleton Half Marathon with 14 runners taking up the challenge by running elsewhere over the weekend (at least one was at the London Marathon).

At the event was long-standing local race photographer Bryan Dale and his photos can be found online at racephotos.org.uk.

Congleton Half is also used as means to raise funds for local charities chosen by Harriers club members. This year’s charities were East Cheshire Hospice, Ruby’s Fund (an inclusive sensory centre and social café in Congleton for children and young people with additional needs and disabilities, and their families, carers and friends) and the local food bank. The exact amount raised is still being totted up and will be posted on the club’s website.

The race can only take place because of the hard work of the race committee with a lot of preparation required to sort out road closures, licences etc, all made more complicated this year by the uncertainties of covid and the new starting arrangements.

Special thanks went go to the committee for all its efforts. The other critical factor is having sufficient marshals to staff each junction to ensure the race is run safely and to ensure no runner takes a wrong turn.

More than 60 marshals participated on the day, helping make sure it was a success, so thanks to everyone who gave up their time and helped out. One of the nicest pieces of feedback from runners is how supportive every single marshal is to all the competitors, clapping and cheering each and every one.

It’s one of the reasons the Congleton Half is unique and why many runners come back each year to test themselves on the undulating course. The feedback this year from the runners contained nothing but praise and the new starting arrangements were well received.

A club spokesperson added: “The final thankyou goes to all the runners who took part, without which there would be no race. We look forward to hosting you all again at the 38th edition of the race in 2022.”