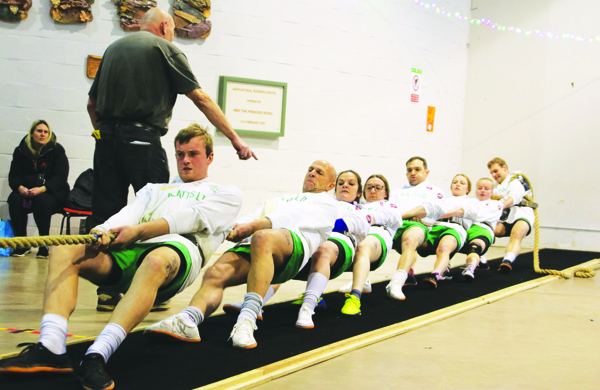 Bosley Tug of War Club recently took part in the Tug of War Association National Tug of War Championships held in Bakewell. Indoor tug of war is different to the more well-known outdoor version of the sport, with competitions taking place on special tug of war matting.

This year, Bosley is competing on the indoor tug of war circuit, having last competed in 2019 and winning the 560kg and 600kg titles. They team was looking to retain those titles in 2021 after the 2020 season was cancelled due to the pandemic.

The club has been competing with a squad of 22 pullers, including four female pullers, which has also enabled the club to compete in mixed competition this year, an event where teams comprise four men and four women.

The national championships were held in seven weight classes, with Bosley taking part in all of them at 560kg, 600kg, 640kg, 680kg, 720kg and catchweight (where there is no weight limit) and the mixed 580kg division.

Bosley missed out on medals in the 640kg, 680kg and 720kg competitions, but made up for the disappointment by winning the 560kg and 600kg divisions – defeating Uppertown from Derbyshire in both finals – and rounded off the day with a gold medal in the mixed 580kg competition after defeating Kilroe from Yorkshire in the final.

This made history for the club as it was the first time that the club has had women in a team winning Tug of War Association national championship gold medals.

The club also came away with a silver medal in the catchweight competition, taking its medal haul to four on the day across all weight categories.

“We didn’t really know what to expect going into this year’s indoor tug of war season, so to come away with three gold medals as well as the additional bonus of a silver medal is a remarkable achievement.

“It is great that we had women winning gold medals with us this year for the first time in our club’s history, and after a long and successful history for our club going back to the 1950s that is long overdue!

He said that subject to international events going ahead in the new year, Bosley had qualified to represent England at the British and Irish championships, which take place in Northern Ireland in January, when the Bosley pullers will be up against other national teams from Scotland, Wales, Northern Ireland and Republic of Ireland.
Bosley has also qualified to represent England at the world championships in the Netherlands in March.

Said Mr Knott: “This will be a big step up for us, but it will be a great challenge against some of the other best indoor tug of war nations in the world.”

He added: “We are always looking for new members to join our club – as the sport is held in weight categories, the more members of any size that we have, the more competitions we can enter. So if anyone is interested in joining our club then feel free to make contact.”

Find out more about Bosley Tug of War Club and drop it a message to join via Facebook, Instagram or Twitter by searching for @bosleytugofwar or call Mr Knott on 07976 591 222.
For further information about the sport of tug of war, visit tugofwar.co.uk.
(Photos: Alan Knott).