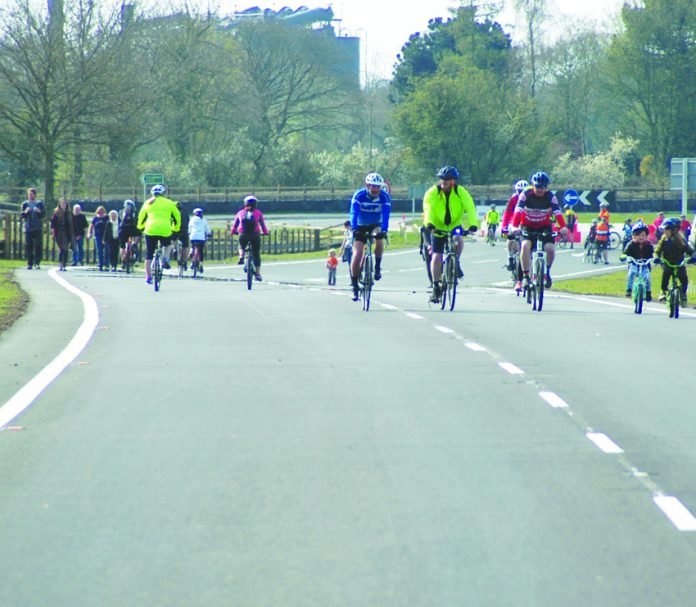 The pandemic is to blame for missing cycling signs on Congleton’s new link road.
Cheshire East Council said this week that their installation was imminent after supply issues caused by covid-19.

Before the £90m Wolstenholme Elmy Way (known locally as Woolies Way) officially opened last month, pedestrians, cyclists and horse riders made the most of the opportunity to ride the route without traffic. However signs advising cyclists and pedestrians where to ride and walk were conspicuous by their absence.

Reader Roy Hayhurst wrote to the Chronicle at the time of the official opening, saying: “There is not a single sign or road marking on the whole of the Wolstenholme Elmy Way to tell cyclists where they can/cannot or should/should not ride, or to warn motorists when they need to be a aware of cyclists.

“Road signs and markings are safety critical components and it looks like the cycling infrastructure (if there is any) has not yet been completed. The Wolstenholme Elmy Way is of course open to cyclists.”

In response, a spokesperson for Cheshire East Council said: “The full set of signage is due to be installed within the next few weeks. The delay has been due to supply chain issues caused by the covid pandemic.

“We did not, however, want this issue to delay the successful opening of the new road to users.”

Woolies Way joins the A534 Sandbach Road to the west and the A536 Macclesfield Road to the north and aims to reduce congestion by taking traffic away from Congleton town centre.

It is named after Elizabeth Wolstenholme Elmy, Congleton’s own suffragist who lived in the town from 1874 to 1928 and is considered to be one of the most important figures in the country’s women’s rights movements.