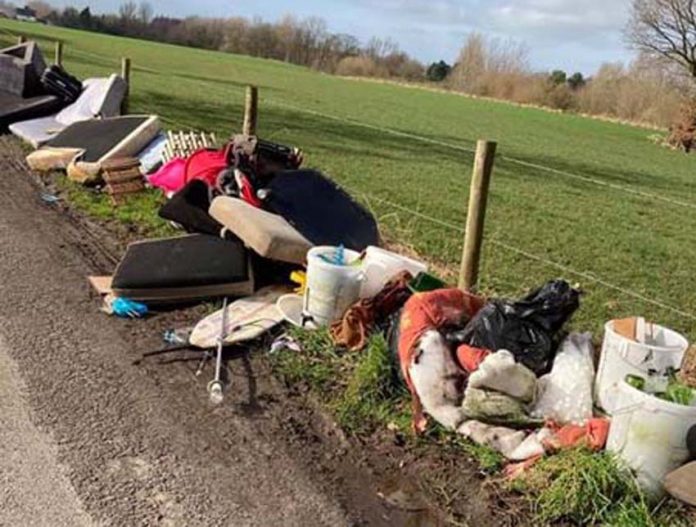 Littering and fly-tipping should be classed as pollution and is a “blatant disrespect of the wider world” a councillor has said.

Jane Smith, who represents the Animal Welfare Party on Alsager Town Council, was speaking after the latest incident of fly-tipping in the area, when household waste was found to have been dumped along the verge on Mill Lane, Hassall.

There are already concerns that the closure of Congleton’s tip by Cheshire East Council will put more pressure on Alsager and Macclesfield’s household waste recycling centres, the nearest alternatives.

The authority wants to shut the Barn Road site as the landowner does not want to renew the lease, which runs out later this year.

An increase in fly-tipping was highlighted as a concern by those who responded to the public consultation on the planned closure of Congleton’s tip.

Ginny Roberts took a photograph of the fly-tipped waste on Mill Lane and said: “We were horrified, couldn’t believe someone was selfish enough to do such a thing.”

Coun Smith said: “If it was left to me I would be in favour of classifying littering or fly-tipping as if it was pollution – and it is pollution.

“It is such a blatant disrespect of the wider world. I would be in favour of some sort of restorative education for people who are caught doing this, where they would go to do work on habitat restoration.

“Littering in itself is bad and is indicative of the wider disconnection of people with the natural world.

“We need to reduce consumption, reuse things and if all else fails recycle them.

There is a blatant disregard for the natural environment. It makes me very angry that we don’t have a grip on this in this country and we should do.”

Coun Smith also described the impact of fly-tipping on wildlife: “There was a very bad incident a few months ago where a wooden container holding polystyrene ended up in a stream in Betchton. It was terrible. I think it was Environmental Health that was called to get it out. It’s not just litter, it’s pollution of the natural environment.

“Mattresses that are fly-tipped will rot to some extent but they have to go somewhere and will end up being blown into streams and other wildlife environments.

Coun Smith added: “In Madeley, just over the border in Staffordshire, recently there was an incident where a hedgehog was found trapped in a Pringles crisp tube. Wildlife hospitals very often report incidents like this where hedgehogs get stuck and freeze or starve to death. The same thing can happen with any discarded tins or containers that wildlife can open.”

Fly-tipping information on Cheshire East Council’s website said the authority will usually arrange for reported waste to be removed within 48 working hours. It may take longer if the waste contains asbestos, clinical or other hazardous wastes as special arrangements need to be made for such waste.

The council seeks to prosecute if the offender can be identified from the waste and/or where there are witness statements.

The maximum penalty for the offence of illegally tipping waste is currently £50,000 and/or a term of imprisonment.