Cancer survivor turns his love of horror into book 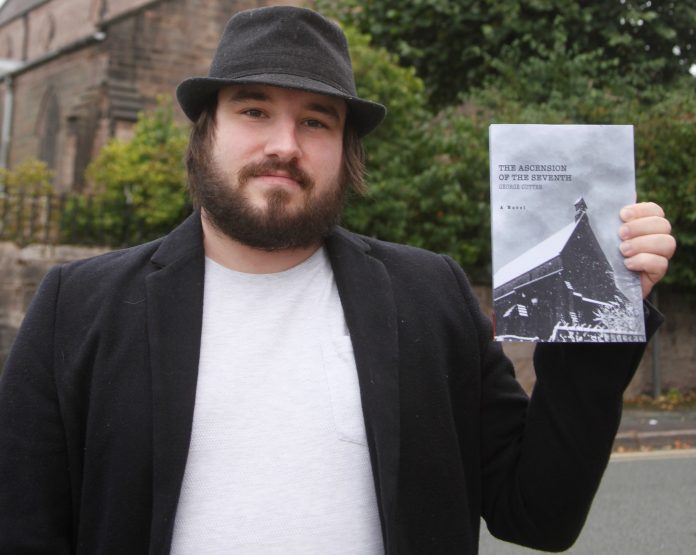 A Congleton man’s experience with cancer inspired him to turn his love of horror into a novel fused with “moments of melancholy and terror”.

George Cutter, (26), originally from Alsager, began writing The Ascension of the Seventh in 2018.

It follows Toby, a young man with aspirations of becoming a novelist, as he is diagnosed with a brain tumour. On the night of his diagnosis, he is visited by the “sixth incarnation of Death”, who tells him that in 30 days he will die and become the seventh and last incarnation.

“It becomes this kind of mind game where Toby is trying to figure out whether it is all in his head or, if it is real, how he might be able to escape it,” said Mr Cutter.

“I wanted to do a horror story that wasn’t fully rooted in horror, so there are moments of horror in it and grotesquery and violence, but also moments of melancholy and terror.

“For all of the nightmarish parts, I feel that there is something very gentle about the characters, because nobody is in a good place in this book.”

In September 2016, Mr Cutter was diagnosed with a stomach tumour that was growing at what he said was an “alarming” rate. While he had the idea for the book some time before this, it was his experience being treated for cancer that significantly informed his writing.

He said: “There was a time when I didn’t think I was going to survive. Then I was told about a miraculous trial drug that managed to shrink the tumour.

“I spent a lot of time speaking to cancer patients and there are moments from the book that I lifted directly from my experience speaking to doctors.”

Mr Cutter wrote short stories throughout his time at the former MMU in Crewe, where he studied creative writing, but had been writing from the age of eight.

Since 2014, he has been the Chronicle’s film critic and has said that watching films has taught him a lot about writing.

The Ascension of the Seventh began life as a short film directed by Mr Cutter in 2014, remade in 2016. It was influenced by The Seventh Seal, directed by Ingmar Bergman.

Fusing his experience with illness and his love of the horror genre felt natural to Mr Cutter.

He explained: “I wanted the book to be a realistic portrayal of what it is like to go through an illness like that, but I still don’t know a lot about my own tumour because when I was first diagnosed it was a very rare form of cancer.

“It struck me as something out of a body horror – I love body horror films. When it comes to slashers, you can run away from the killer; if it is ghosts, you can call in the investigators – but body horror is very internal, you can’t escape your own body.”

Eagle-eyed readers may recognise the building on the cover of the book as St James Church on West Road. The picture was taken by Mr Cutter on a snowy afternoon, noticing that it mirrored a scene he had already written, where his protagonist finds himself in a similar setting.

Mr Cutter currently has two more novels in development as well as a short story collection.

The Ascension of the Seventh is available on Amazon in paperback and on Kindle.