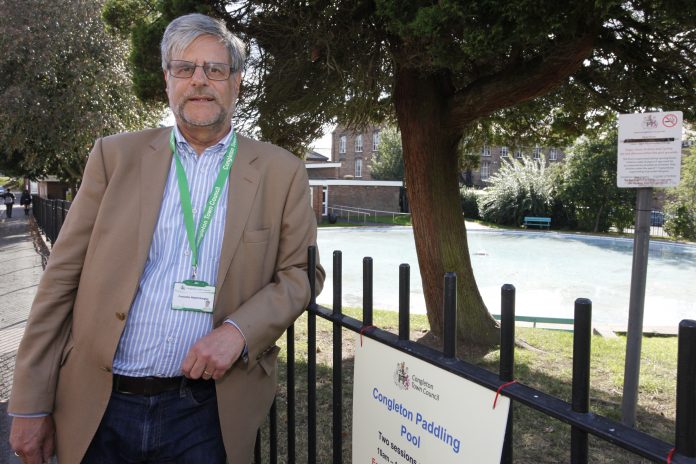 Data has revealed that half of all slots at Congleton’s paddling pool were nabbed by out-of-towners, leading to calls for a Congleton-first approach.

People from Newcastle-under-Lyme, Longton and even Failsworth in Manchester travelled to use the Park Street attraction this summer, which is paid for by locals in their annual precept.

But Congletonians should be given priority access, according Lib Dem town councillor Robert Douglas, who was “concerned” that only 46% of paddling pool users had a Congleton postcode.

He said: “If we have a lovely summer next year, it would be unacceptable to have residents outside the Congleton area booking in such numbers that means people in the town, who are currently solely paying for it, would be restricted in their access.”

The pool has now closed and only welcomed visitors for three weeks this summer because of a delayed opening date. During that time, it operated at a reduced capacity with only 140 allowed in at any one time in line with covid guidance.

To allow this, an online booking system was set up. Data gathered from the system was presented at a meeting of the town council’s Town Hall, Assets and Services Committee on Thursday, where Coun Douglas set out his case for making sure Congleton residents could enjoy the paddling pool before anyone else.

He proposed that council officers should either investigate charging those living outside of the town for use of the pool or look into setting up a system that allows townsfolk priority access to the slots – a motion that was approved by the council.

“By charging those who live outside the Congleton area, we would be enabling more local residents to use the paddling pool and reduce its carbon footprint,” he said.

Meanwhile, the council agreed to continue looking into options for replacing the current pool with a “splashpad” – an area where children can play in water, but where there is little or no standing water. They typically feature ground nozzles that spray water upwards out of a rain deck.

Other towns with splashpads have reported that they eliminated the need for lifeguards, as there is little risk of drowning.