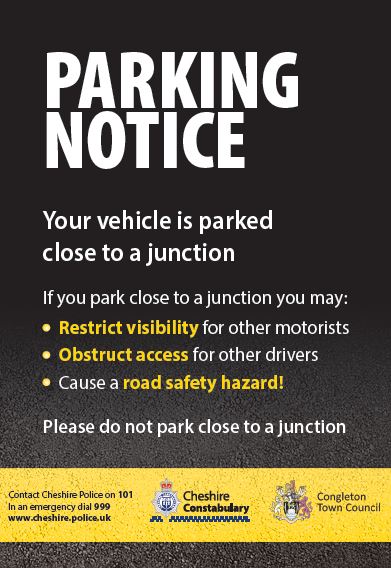 “Inconsiderate parking” posters will be made available for residents to place on the windscreens of vehicles that obstruct driveways.

It is hoped the warning notices will put an end to the “frustration and angst” caused by parking problems in Congleton, a councillor hopes.

The printable signs will be uploaded to the town council website and will be available for collection from the visitor information centre at the town hall.

It comes after a period of “inconsiderate” parking near Astbury Mere during lockdown, when residents reported incidents of road rage and missed deliveries.

The notices, which display the town council and police logos, were the idea of residents including Wayne Nicholls, who worked in conjunction with Lib Dem Couns Suzy Firkin and Margaret Gartside, as well as the Astbury Mere Trust, Cheshire Police and Cheshire East Council, to find a solution.

At a meeting of the town council’s Community and Environment Committee on Thursday, Coun Firkin presented the notices to colleagues.

“This came out of a lot of frustration and angst near Astbury Mere at the peak of lockdown where it was demonstrated just how strangely people could park,” she said.

“In response to the difficulties experienced by residents, which included problems with antisocial behaviour, missed deliveries, people being blocked in their drives and emergency services being unable to attend incidents, meetings were held about how we could solve the problem.

“We are going to be stealing an idea from Wigan Metropolitan Borough Council, which is a series of notices which will be available on our website for residents to download and use.

“When they have been inconvenienced, the notices can be put on windscreens to say that someone’s parking is obstructive.

“These have already been used around Astbury Mere to tell people that they are parked on a junction, for instance, and the idea is to try and change people’s behaviour.”

Conservative Coun Sally Ann Holland said: “For years, I have been battling a similar problem where people who are going to the railway station park along streets in Mossley. I think this is a great idea and I look forward to directing residents to it.”