Call for improvements on ‘dangerous’ road 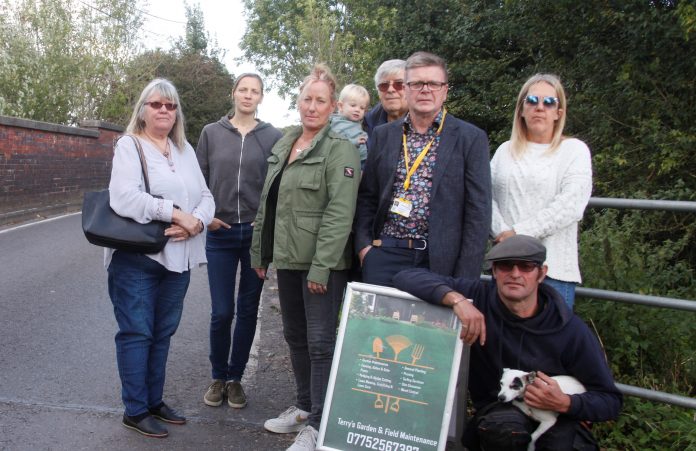 Overgrown hedges have forced residents of a secluded Congleton estate to walk on a road without a path, prompting safety concerns about speeding drivers.

People living on the Bath Vale housing development have called for improvements to the only access that they say is “dangerous and dark” at night.

With the help of Couns Rob Moreton and Suzie Akers Smith, they have cut back some of the overgrown foliage themselves.

At a meeting of the town council’s Community and Environment Committee on Thursday, residents asked for street lighting, reduced speed limits and increased maintenance to improve pedestrian safety.

Coun Moreton said: “I was first approached a few weeks ago about the safety of oncoming traffic over the Bromley Farm bridge on Bromley Road.

“When I went there with Coun Akers Smith in her role as the cycling and walking champion, the weeds and nettles were all overgrown. For people walking home at night, it was very dangerous and dark because they were pushed into the road.

“We put in an enquiry to Cheshire East Council requesting that the weeds be cleared, and the road be made a bit wider, but in the end, we decided to just do it ourselves rather than waiting for the highways department.

“With the help of the residents, we cleared all the weeds, and the visibility is much better now.”

Another concern for those living on the Bath Vale estate was that a footpath they expected to be built as part of a planning application had not materialised.

In a written report, Coun Akers Smith said: “There is no doubt, with this highway route being the only in-and-out access to the development, that there needs to be a pavement.

“As it stands, people drive too fast for others to feel safe walking. The overgrown hedges mean people walk into the road and there is not space on the pavement for parents with pushchairs and mobility scooter users.

“A new pavement should be a continuation of the pavement leading up to the bridge and to meet the one on the Bromley Road side.”

Coun Akers Smith added: “Drivers need to be made aware that one way has priority over oncoming vehicles and if the road has speed reduction measures put in place, gradually residents’ confidence will be renewed to walk and possibly cycle for shorter journeys.

“Low level solar lighting would enable residents to feel safe walking across the bridge at night.”

Resident Helen Taylor told the committee: “One of the main problems we have is the speed coming onto the estate. It is a very narrow bridge without a footpath, so when it is overgrown, people are in the road with children, babies in pushchairs and wheelchairs.

“A speed of 30mph is far too fast and we want the limit changed to 20mph. We would also like a greater police presence to monitor the speed.”

She added: “We recently had a problem with articulated lorries coming onto the estate because Buxton Road was shut. The lorries were not able to turn down, it was impossible.

“They had to back out at the risk of people walking across the bridge, particularly the children who might not be aware.”

The residents summarised their requests for improvements, which included more signage, a schedule for clearing overgrown foliage at the bridge and added lighting in the area.

The town council agreed that Streetscape, the town’s maintenance team, would assess the area and include it in its programme, that support for residents would be requested from Cheshire East and that the financing of new road signs would be considered.