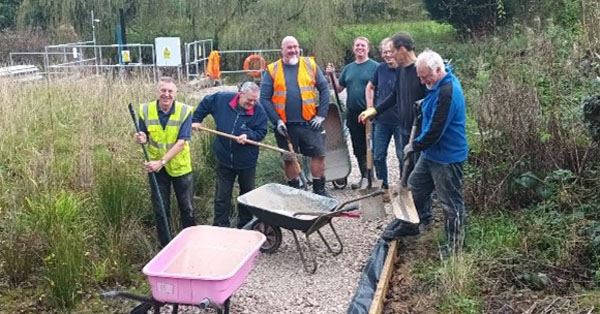 The prospects of a first payment landing in the current accounts of shareholders in a green energy scheme are looking positive, the project’s latest newsletter has said – thanks to the rise in prices.

Congleton’s hydro scheme at Havannah generates electricity from the river Dane via an Archimedes screw, selling the power generated to Siemens.

As well as helping the community both educationally and with cash, the project offers a return to its backers and said that despite a dry summer its funds were charged up and ready to give investors a first shareholder payment in line with the share prospectus, around £52 per £1,000 invested. Also, in line with the share prospectus, £4,000 has been donated to community projects.

The project’s autumn newsletter followed a dry spell as far as both news and electricity went.
“We could have produced a newsletter during the summer, but it would have been a blank sheet of paper – the only news was no rain, hence no generation. Our prediction that once the school holidays started it would be rain, rain and rain was totally wrong!”

Thanks to autumn rains – rainfall in the North West was 129% of October’s long term average and above normal, the Environment Agency said – the hydro project caught up but did not meet its original target, based on historical rainfall and river Dane water volumes, around 250MW/hr.

Said the newsletter: “We are a bit short of that but hopefully, a decent winter and spring will see us back on track.

“But the recent doom and gloom of the energy price rises affecting all of us has been a benefit to Congleton Hydro. We have received decent price increases from our customer and via the feed-in tariff payment.

“We have just submitted our November invoices, which was for 32,246kWhr, the highest monthly generation we have achieved. If we include the feed -in payment for the month, paid twice per year, the total income in the month would be our largest to date.

Generation in November 2021 was 20,375KWh, much lower than this year. The highest monthly figure achieved before this was January 2022, when 27,465kWh was generated but at a lower price.

No rain had a silver lining, and meant volunteers could stay dry while installing bat boxes around the site. Seven of these were made, based on the Royal Society of Biology design.
Bats climb up the narrow slot at the base of the box. They have a very keen sense of smell, so untreated wood is used.

Volunteers were also kept busy constructing a good quality path between the powerhouse and the water intake, giving much easier and safer access for the de-trashing teams, who remove debris.

The re-wilding team of volunteers carried on with their “never-ending” work of trying to reduce the amount of Himalayan balsam that “invades every nook and cranny”. Almost all the tree and shrub planting done last winter has survived, and the ground flora, which was initially mainly rye grass with bare ground in between, is rapidly becoming denser and more varied.