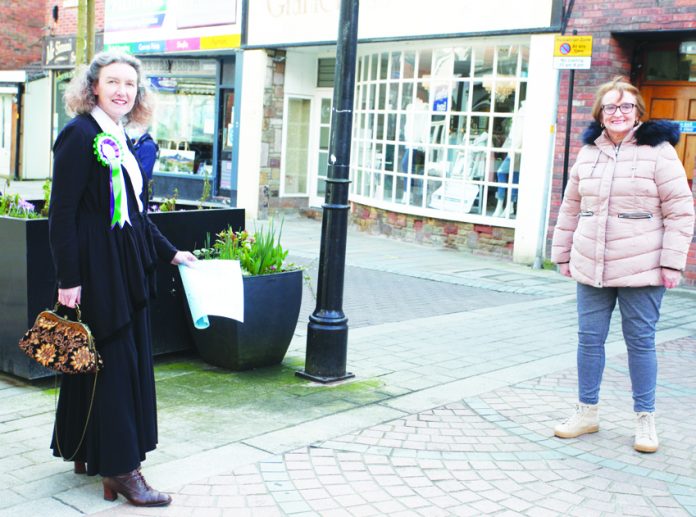 A heated discussion about the best spot for a suffragist statue became “more about misogyny” than the improvement of Congleton, a campaigner feared after three town centre locations were rejected by councillors.

It was a long and emotive debate at Congleton Town Council meeting on Thursday night when members were asked to consider the best place for a statue of the trailblazing women’s rights campaigner Elizabeth Wolstenholme Elmy.

She is considered to be one of the most important figures in the women’s rights movement but was largely written out of history until Elizabeth’s Group, which has campaigned for a statue to honour her, set about raising more than £60,000 three years ago for a bronze sculpture.

At Thursday’s meeting, three locations for the statue on Bridge Street were put forward by the group, with the preferred option being in the centre of the junction with Victoria Street.

However, following a vote of eight to six, council officers were sent away to investigate the viability of other locations in Congleton.

Elizabeth’s Group chair Susan Munro said she was “disappointed” with the decision and blasted some of the town councillors for being “uninformed” and liking “the sound of their own voices” too much.

Among the first to speak at the meeting was Hazel Reeves, the internationally renowned artist commissioned to sculpt Elizabeth.

She said: “By placing Elizabeth in the very heart of the town, you will be firmly putting her legacy back on the map and reaffirming this growing pride in a tiny yet incredibly significant woman from Congleton.

But it was not long before councillors started airing their concerns.

Lib Dem Coun James Smith said of Bridge Street: “It is only a short pedestrianised area, and it is quite narrow. We already have a lot of street furniture there, including planters and outside seating.

“Some other statues have areas of free space around them to stand and admire, but Bridge Street does not have that space.

“The pedestrianised area is also used by a lot of cyclists, so surely there is a better, quieter position we can find within the town where people can stand back without being hustled and bustled out of the way.”

Lib Dem Coun Robert Douglas concurred, arguing that none of the Bridge Street locations were suitable, while Independent Coun Russell Chadwick said that more suitable alternatives would be in the community garden on Lawton Street and Congleton Park.

In support of locating the statue on Bridge Street Coun Kay Wesley, a trustee of Elizabeth’s Group and a Women’s Equality Party representative, pointed out that it would stand where a phone box once stood for decades.

She said: “Elizabeth is a lot smaller than a telephone box so she would not be any more of an obstruction.

“If you are talking about size, please be reassured that she would fit perfectly into that spot where the phone box used to be.”

Lib Dem Coun Suzy Firkin then urged councillors to think of the benefits the statue would bring to the town.

She told them: “You are standing in front of a goal and refusing to score, you really are. We want Elizabeth to be accessible.

“Stop thinking about your knowledge of different locations in Congleton and think about making a brave statement on what this could mean for us as a town.”

After the meeting Mrs Munro called it “extremely disappointing”.

She said in a statement to the Chronicle: “It was obvious that several of the elected members had not even bothered to read up on the project and had no understanding of what we have planned or are trying to achieve.

“They had no understanding of the project after nearly three and a half years, during which we have written books, made films, given lectures and had a road named after her, it’s simply beyond belief; they are playing games.

“I was excruciatingly embarrassed that Hazel Reeves, our sculptor, had to sit and listen to the uninformed nonsense that was spoken by some. The statue will be street art, not garden furniture. Street art, as in art for the street. What part of the title are they not getting?

“My overall feeling about this council is that a small number of them have their own agendas, like the sound of their own voices and some of them were simply uninformed.

“It is very disrespectful of them to go into meetings with people who have raised money and are wanting to gift something to the town and not have the decency to have read up on the project beforehand.

“I fear that last night’s meeting was more about misogyny and less about planning for the improvement of Congleton.

“However, Elizabeth’s Group, like Elizabeth herself, embodies the Shakespearean quote ‘though she be but little, she is fierce’ and we will fight on regardless. We will continue our fight in true Elizabeth Wolstenholme Elmy style – deeds not words!”

Liberal Dem Coun Paul Duffy, who chaired the discussion on Thursday night, hit back in responding to Mrs Munro’s statement, saying: “To call some of the councillors misogynistic when we are friends and allies of the women’s movement is just blinkered.

“It is an emotive subject and what I would make clear is that the town council did its job on Thursday night. It is not there to rubber stamp anything and we had some questions.

“The fallout of that discussion has been unbelievable for everybody. It is the toughest meeting that I have had to chair.”

• See letters page: campaigners for other statues for women call for Congleton Town Council to change its mind.