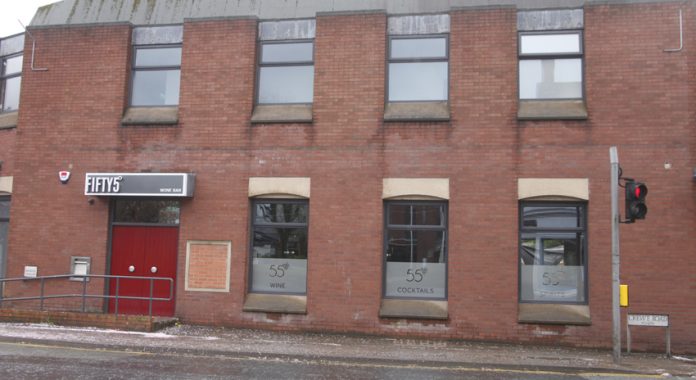 A town centre bar that has applied to extend its licensing hours from 10pm to 11pm on Sundays has said that “the last thing it wants to be is a nuisance to Alsager and its residents”.

A handful of people have opposed the application by Fifty Five Degrees, at 2-4, Crewe Road, because of noise concerns, with one saying Sundays “should be a quieter day”.

Among the concerns was that music played within the premises would be heard at homes beyond the rear when doors leading to the beer garden were open.

Bar director Dean Jackson’s application for a full variation of its premises licence to extend opening by an hour on Sundays was considered by Cheshire East Council’s Licensing Act Sub Committee on Thursday.

The premises, a former branch of the Natwest Bank, is described in the Licensing Act Sub Committee’s report as “a terraced property selling craft ales, wines, cocktails and spirits for consumption both on and off the premises”.

Cheshire East received four official objections to the application from people living near the town centre bar although Cheshire Police had no objection, neither did the council’s environmental protection team.

Representing Fifty Five Degrees at the meeting, Alan Dean said the application was an opportunity to bring closing time in line with the six other days of the week it is open and also so that people could come in for a drink after a meal at local restaurants.

He explained that at the moment “a group of people might come in at 9pm and then be asked to leave because of existing hours and continue drinking at another premises that is open until 11pm”.

“It’s just so we can have that extra hour as and when we need it,” he said.

The meeting heard that Fifty Five Degrees’s capacity is around 75 customers indoors “but was lucky to have a dozen on Sunday”.

Steve Butterfield, one of three objectors at the meeting, said that as an Alsager resident he supported local businesses but wanted to remind them that Alsager was a “largely residential area” and that houses were not very far away from the town centre.

“I live in part of Alsager behind the bar, across Milton Park, so my concern is about open doors in the beer garden when music might be played on a warm summer’s evening. The noise coming from the rear of the building is my concern from a resident’s perspective.”

He explained music would be played within the bar and would continue for the last hour on a Sunday if the application was approved.

“We have got a beer garden but Sunday is a particularly quiet day. We want to stay open to make a few more pounds and not miss an opportunity,” he explained.

“We’ve been in business for two years and I am not aware of residents coming in to complain about noise. We stand by our record; we’ve had no police complaints and no noise complaints.”

Opposing the application, resident Rachel White told the meeting: “I am not a killjoy and I’m aware of how horribly hospitality has been hit in the last 14 months.

“I think there is enough time for people to have a drink up to 10pm.”

She added: “Sunday should be a quieter day. Mr Dean said it’s a quieter time for him and it would be good for the premises to have a quieter day and for the staff as well.

“We need a rhythm to our week and it’s a race to the bottom for everybody when premises are open later and later. We should be encouraging responsible drinking as a community.”

She added: “Let’s have a quiet time on Sundays for the sake of residents and staff at these premises” and she wished Mr Dean’s business “every success”.

Committee chair Coun Mark Goldsmith responded to Ms White saying that she made some “good moral arguments” but that the committee was restricted to legal perimeters and that its hands were tied on those issues.

Another opponent who spoke at the meeting was resident Pauline Hubbard, who is also an Alsager town councillor.

She explained to the committee that from where the bar is at Bank Corner there are residential properties and bars and then an “interweaving” of flats, houses and other licensed premises going towards the west end of Alsager.

“We have a thriving night-time economy but balancing that for residents is crucial and residents are getting battered from both ends as they are sandwiched in between,” Coun Hubbard told the meeting.

While she said more people will be starting to visit restaurants and bars as lockdown restrictions ease, which she said would be good for the economy, Coun Hubbard added: “People will want to be outside and it will be difficult for those who want to observe social distancing for some time. Although there is the intention to keep music inside the impact of those two things – covid and social distancing – will mean people will want to stay outside.”

She said there was nothing to stop the bar expanding its offer into the beer garden “as that’s what customers would want – they want something to eat and drink and they do like music as well”.

Coun Hubbard said to Mr Dean: “We do appreciate what you’re trying to do but it needs to be balanced for residents.”

He explained the music would be background music within the bar. “It’s not booming and it’s not loud,” he said.

Cheshire East licensing officer Kim Evans explained that a licence is not required for background or incidental music adding that complaints about noise at licensed premises can be dealt with under the Environmental Protection Act.

Mr Dean said there was no intention to play any music outdoors.

He added that Fifty Five Degrees is a family-run business and that his wife and son are the directors. He told the meeting: “We are very approachable people. We want to be part of Alsager and like to think we are part of Alsager. If any of those who are objecting want to come in to see how we operate I’m sure they would be pleasantly surprised.”

Coun Goldsmith said a decision on the application would be announced in the coming days.