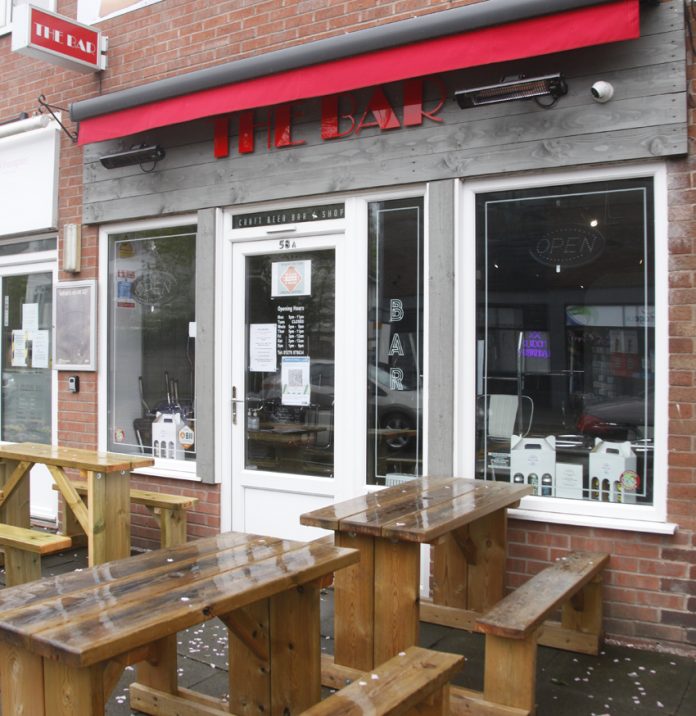 Concerns about the “cumulative effect” of licensed premises on the residents of Alsager should be addressed with the planning department at Cheshire East Council, it has been suggested to those who oppose later opening hours.

The comment was made when the authority was considering an application by The Bar, at 58a Sandbach Road South, for a full variation of its premises licence including an extension to opening hours on Sunday evenings.

The Bar can already open until 11pm on Mondays and Thursdays and midnight on Fridays and Saturdays. As well as wanting to extend opening on Sunday evenings from 9pm to 11pm, licensee Walter MacGowan also wanted the same extension on Tuesdays and Wednesdays.

In addition, he also wants to open two hours earlier, at 2pm Monday to Thursday and at noon on Fridays. There was no application to change the noon opening times on Saturdays and Sundays.

Mr MacGowan said the application had been made “to provide more flexibility particularly to accommodate more daytime outdoor use and to respond to changes in demand post covid-19 lockdowns.”

The application was considered by Cheshire East’s Licensing Act sub-committee on Friday, which was told there were four objections. There were no objections from the council’s environmental protection department while Cheshire Police had not responded, which was taken as it had no objections.

Two of the opponents attended Friday’s virtual meeting as did Mr MacGowan.

He said: “It’s quite simple, really, on Sundays, we wish to open until 11pm so that we are in line with other premises and to reflect that while we close at 9pm at the moment we still have a demand to serve after that time, which we currently can’t meet.”

He told the committee that the neighbouring buildings were a Costa on one side and a physiotherapist’s and dance studio on the other, neither of which he said were open after 8pm. A church behind the premises was not occupied after 7pm, he said.

Mr McGowan said that he had only had to ban one person from The Bar in the two and a half years it has been open and added that as a former prison governor he had a “rough idea of how to deal with people”.

He described customers, in the main, as “exceptional” adding that music was not played outside and that there had never been a complaint from the council or the police about noise.

“We’ve been a well ordered house. We like to think we’re a good neighbour and we have all the notices up about customers leaving properly. Generally we run a good house and are proud of it,” he told the committee.

Local resident Rachel White, who lives on Sandbach Road South, said her house was one of the closest to The Bar. She explained her bedroom windows overlooked the Bar’s outside area and that “conversations involving people sat outside, when they have drunk quite a bit and are jolly, does have an affect”.

Mrs White added that she and her husband “really like The Bar” and that there is a different beer to try every time customers go in, and the staff were “very knowledgeable”.

“I have no problem with the opening times being changed, just the closing time,” said Mrs White.

She said the hospitality sector has been “horribly hit” in the last 14 months, that it is a “great” sector “but we would like a balance between hospitality, other sectors and residents who live nearby”.

She referred to the other bars and restaurants that had opened in the town centre in recent years, adding “we would just like to see Sundays being a different day, a quieter day”.

“We have lots of advantages of living close to the town centre and appreciate we have to be tolerant but just feel we would rather Sundays (were) a quieter day and would rather not see people drinking late on a Sunday,” she told the committee.

Mrs White also mentioned that the A4 statutory notice in The Bar’s window advertising the application would have been easy to miss and that she had only known about it as a neighbour had brought it to her attention.

She said she was often aware of noise coming from the premises when her windows were open or when she was in the garden during spring and summer.

Mr MacGowan said there was seating at the front and rear of the premises, which were “extensively used” and that he had spent “money and time” to make sure people use the outside areas.

“We have not had a single complaint from anybody at all about noise. We play music inside very quietly.”

He added: “11pm seems to be a standard time for closing in lots of places and we just wish to have that. I think it’s a quiet bar.”

In response, Mrs White pointed out that other premises in Alsager, including Casters restaurant and the Fifty Five Degrees bars had put in similar applications, which had been challenged.

Another resident who raised her objections during Friday’s meeting was Pauline Hubbard, who mentioned the number of flats, apartments and other properties nearby. She also mentioned homes on Station Road, on the other side of Milton Park, adding that “the noise from the back of The Bar and other premises can carry over, particularly on a still night, to residents in the surrounding area, front, side, back and that is cumulative”.

“This is having a cumulative effect on Alsager. The concern is when premises are closing and the noise people make when going from pub to pub. It gets noisy and that’s what the issue is about,” said Mrs Hubbard.

Referring to the application to stay open later on Sunday, she said: “My concern is the Sunday time, when people would like things to be quieter and it gets noisier.

ome of the opening hours on this application are reasonable but it’s really a plea about the Sunday opening time.”

Committee chair Coun Mark Goldsmith suggested the residents spoke to Alsager’s Cheshire East councillors to see what they could do about the cumulative effect she referred to and whether they could talk with council planners about granting planning permission for bars in the future.

Mrs White said: “Residents do not like to complain. They find it hard to complain and think there will be potential conflict if they do complain.”

Mr MacGowan pointed out that the only time there had been an increase in noise outside was when the Government imposed a 10pm closing time last year, when all customers had to leave at the same time.

He explained that his original licence gave him permission to open until 11pm on Sundays preceding a bank holiday “and that’s happened without any difficulty”.

Mr MacGowan added: “We are aware of our responsibilities and continue to set the standards we said we would stick to when we opened. We said we would be a good neighbour and think we have been.”

Coun Goldmsith closed the meeting by saying they would be informed of a decision within five working days.