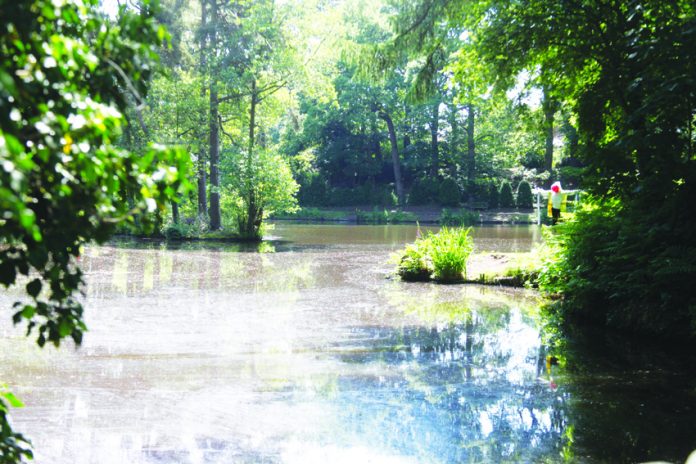 An “oxygen crash” has led to the closure of a popular fishing spot.

The alarm was raised at Goodwins Pool, Holmes Chapel Road, on the outskirts of Congleton, after fish were seen “gasping” on the surface at the beginning of last week.

Congleton Anglers Society decided to close the water, stocked with roach, rudd, bream, carp and perch and sought advice from the Environment Agency.

Huw Jones, bailiff and angling club secretary, said: “Some anglers fishing at Goodwins Pool phoned me to say that fish on the surface appeared to be ‘gasping’. I took a device down there that measures oxygen in water and the reading I got was low.

“To save the fish any more stress I decided to close the pool.

“I had a discussion with them about ways to stop it happening in future and we are looking at a long-term solution.”
The pool was due to reopen at the beginning of this week.

Mr Jones added: “A pump is coming on a short-term basis so we can pump oxygen into the water when necessary, to save the fish any more stress.”

He said one or two fish might have died as a result of the dip in oxygen levels.

Explaining what causes an oxygen crash Mr Jones said: “It happens when low temperature is followed by high temperature. We had very cool periods up until recently then a hot period, so it’s been going from really cool to really hot. Usually spring warms up gradually.”

He said: “The Environment Agency was happy that it was an oxygen crash with no other factor involved, saying “it is a well known issue with water”.

Up to 20 fish were reported to have died at Smith’s Pool in Fenton following reports of “fish in distress” last weekend.

The Stoke Sentinel reported that the Environment Agency investigated and found that a number of older spawning fish had died, which the agency said was a “natural occurrence brought on recently by the changeable weather”.

A spokesperson for the Environment Agency said: “”Following reports of fish in distress, specialist officers were deployed to the site where they took dissolved oxygen readings and offered advice and guidance on how to manage the situation to the club owners. Officers will remain on hand to deploy Environment Agency aeration equipment if required.”

They said that “like many good fisheries, Congleton Anglers have invested in their oxygen meter to safeguard their stocks”.

The spokesperson added: “The Environment Agency works around the clock to respond to environmental incidents, including reports of fish in distress which often increase during the summer months as water temperatures increase.

“Each year, we carry out many fish rescue operations, and save thousands of fish by utilising aeration equipment to restore oxygen levels when needed. We also provide angling clubs, councils and fisheries with free advice on how to manage their waters effectively and sustainably.

“Anyone who sees fish in distress should contact us 24/7 on 0800 80 70 60.”
The agency explained that hot, sunny weather and algal blooms can cause “serious fish kills” by reducing the dissolved oxygen that fish depend on.