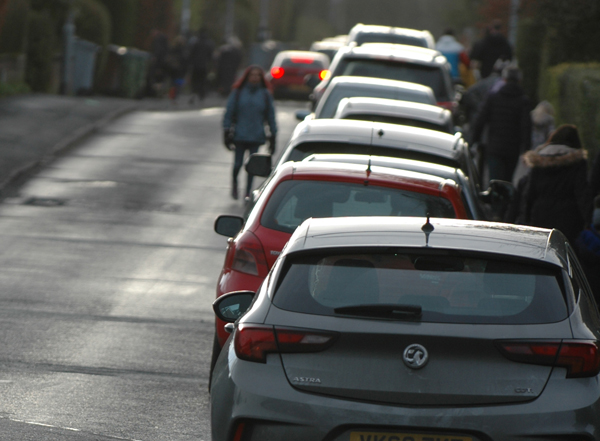 Drivers who sit in stationary vehicles with their engines running face being fined after Cheshire East councillors voted to adopt legal powers to crack down on the polluting practice.
The move was made despite a statement that fining drivers with engines idling was “too confrontational” (writes local democracy reporter Belinda Ryan).

Parents waiting outside schools are among the worst offenders – and the council’s Highways and Transport Committee heard on Thursday how one car was spotted outside a Congleton school this week with its engine idling for 30 minutes while another two were churning out noxious emissions for 15 minutes.

Parents waiting to pick up their children from school who refuse to turn off their car’s engine could face a fine.

Highways officers had tried to steer the council away from an enforcement policy because of a lack of resources, instead recommending it continued the programme of educating drivers about the dangers of engine idling.

Currently, more than 30 local authorities have adopted anti-idling enforcement legislation, although very few of those authorities have issued fines. One of the main issues around the fines are that enforcement officers must ask the driver to turn off their engine and only if the driver refuses can a fine be imposed; a Cheshire East report said this was “very confrontational”.

But following an amendment proposed by Coun Les Gilbert (Dane Valley), the committee voted to adopt additional legislative powers enabling the council to fine drivers as well as continuing the education programme. The committee also voted through an amendment by Crewe councillor Connor Naismith, who was against introducing fines but wanted to keep the matter under review, and proposed the council write to the Government to ask for flexibility regarding the level of fine because, at the moment, it was only £20.

Coun Naismith’s amendment was voted through unanimously but Coun Gilbert’s – which actually called for fines to be introduced – just scraped through by seven votes to six.

Coun Naismith, who voted against Coun Gilbert’s amendment, told the committee: “If we take on these powers, then it is inevitable the council will come under immense pressure to actually divert enforcement officers away from other kinds of activity towards this.”
Committee deputy chair Coun Laura Crane said: “If we are not able to enforce legislation that we take on, then I don’t see the point to taking it on.” But others disagreed.

Coun Gilbert said: “To my mind, this isn’t just about enforcement, it’s about sending out a message that reinforces the education campaign. There are hundreds of rules and regulations that we don’t enforce. Hopefully, the reason, in most cases, is because it’s not perceived to be a big enough problem, so the mere fact that the rules and regulations are in place has the desired effect.

“I believe that most of our residents are law abiding and, if told an action is unlawful and they can be fined for a breach, they’ll comply. If compliance is simply advisory, I suspect there will be an element who will make choices that they wouldn’t make if they were committing an illegal act.”

Willaston councillor Allen Gage said that as some enforcement officers visited schools when there were issues “we should arm them with the power to enforce” – and he believed the fines should be higher.

“For me it’s about schools and children,” he said. “Why should a six-year-old child have to stand with a three-litre diesel exhaust blowing in their face? I know it’s difficult but, for me, the protection of the child is important.”

In Cheshire East, there are currently 12 air quality monitoring zones that have demonstrated a breach of the annual mean concentration for nitrogen dioxide.

A council report stated: “The number of air quality management areas have reduced across the borough, suggesting that campaigns are effective and progressively changing driver behaviours.

“Additionally, funding is available from central government to support promotion/education campaigns, which means that these campaigns can continue in the future.”

The main target areas of the campaign are schools, buses and taxis. In a snap survey across 18 schools, enforcement officers observed 15 cases of idling across eight schools.
In 2020, diffusion monitoring tubes were installed at Wilmslow, Crewe and Macclesfield railway stations. All showed higher concentrations of nitrogen dioxide, although the report said that this was likely to be associated with increases in traffic following the national lockdown.

RAC head of roads policy Nicholas Lyes said: “Whether it is outside schools, picking up relatives from stations, or in a car park, we can all do our bit by switching off our engines and reducing our emissions.

“Drivers with stop-start technology should also ensure it is engaged which will reduce pollution when waiting at red traffic lights.

“We would support authorities that visibly encourage people to stop engine idling and for those drivers who refuse, we feel a fine is a proportionate response.”

• Do you have a view on this? Email chronicleseries@aol.com