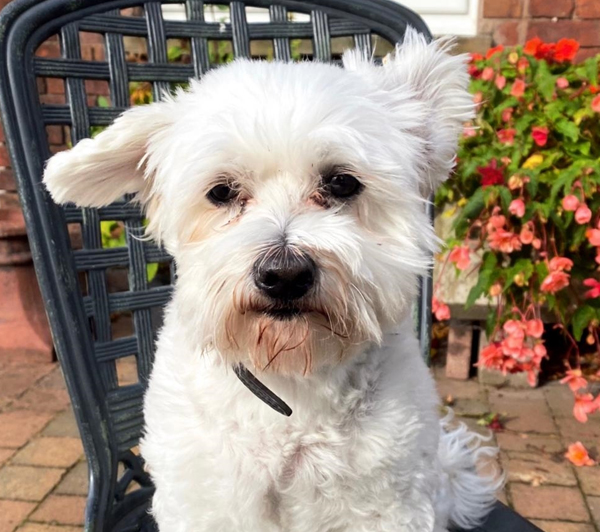 A pair of dog walkers were left traumatised after a “horrific” attack on Alsager’s Salt Line.
Sasha Glover and her partner Andy Stubbs were out last Tuesday with Maltipoo Maxxy when three Staffordshire bull terriers turned on him while he was not on a lead.

It happened at around 4.30pm just five minutes into their walk near the Roughwood Hollow entrance.

Miss Glover, of Haslington, said: “The owners saw Maxxy coming and they didn’t warn us about their dogs at all. They came from every angle and locked their jaws onto him. It was absolutely horrific. He’s got a horrible, massive cut on the back of his neck and an abdominal rupture, as well as a fractured jaw.

“We were trying to break them off but we couldn’t. It was a pack mentality attack. Maxxy was yelping and squealing in pain. We were feeling absolutely helpless.”

After a struggle, the pair managed to rescue the dog, which belongs to a friend. They demanded the contact details of the people walking the Staffordshire bull terriers – a man, a woman and a young girl. But despite promising to return to the scene after putting their dogs in the car, they drove off.

Miss Glover said they were driving a white Caddy-style van with double doors and no rear windows.

“We realised they had bolted,” she said. “We were concerned because the little girl they were with was hysterical. If their dogs can attack another dog, you never know how they would be with a child.”

Maxxy was at the vet’s for several days and was given pain medication while a 15cm laceration on his neck was stapled.

Miss Glover said: “Me and Andy are still pretty shaken up by the whole thing. We both keep getting flashbacks and we’re not sleeping very well. Maxxy is an absolute warrior. He’s always so happy and sociable. We just hope the attack won’t change him.”

Police have now launched an appeal for information about the owners of the three dogs.

Sgt John Roberts said: “The injured dog had to be taken to the vet to be treated and the owners were left distraught by the attack. I would urge anyone with information to get in touch with police so that we can find those responsible.

“I’d also urge anyone who has experienced a dog attack in this area with dogs of the similar description to contact us.”

Anyone with information should call Cheshire police on 101 or visit cheshire.police.uk/tell-us quoting incident number IML 1419004. Alternatively, information can be given anonymously by calling Crimestoppers on 0800 555 111.

A fund-raiser has been set up to pay for Maxxy’s vet bills at gofundme.com