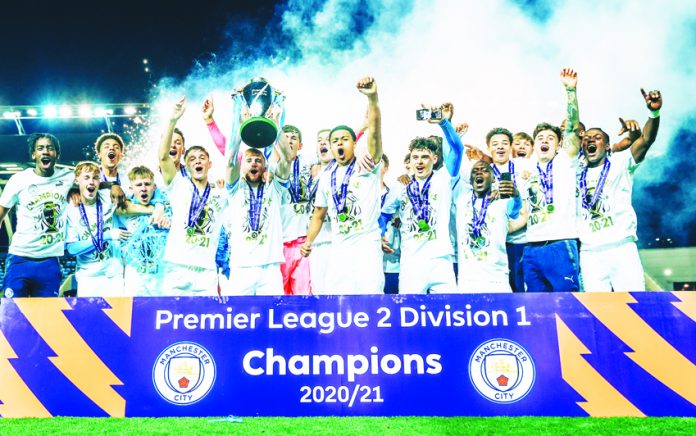 But there has been another less publicised triumph as City U23s have landed the first division title in Premier League Two (writes Tony Bugby).

And captaining the EDS side to success has been 19-year-old Sandbach player Tommy Doyle, a budding star whose late grandparents Mike Doyle and Glyn Pardoe were City legends.

City won the title in style, finishing 14 points clear of runners-up Chelsea after putting together a 17-match unbeaten run in the league, culminating in a 6-1 final-day win at Tottenham.

It marked a remarkable upturn in the EDS side’s fortunes in recent years, as Doyle explained: “In the league we have previously not done well and been fighting relegation and battling to stay up.

Doyle, a former pupil at Elworth CE Primary and Sandbach School, was impressed with the style of play from the U23s, none more so than in their impressive 4-1 home win against second-placed Tottenham in their penultimate league game.

“Though we already had won the league, results still matter and some of the football we played in the first half was frightening,” he explained.

Doyle, who has been at City since the age of four having also played for Sandbach United, also revealed the success was achieved in the wake of far from ideal preparations for games.

He continued: “We have probably only had five or six training sessions as a group all season because of circumstances.

“We have trained together very little and often just turned up on game day and played. The attitude of the players has been brilliant.”

Doyle, capped by England at every level from U16 to U20, was absent for the start of the EDS season as he was required to be on the bench due to first-team injuries.
“After a couple of months, I started playing for the U23 again to get minutes and have been captain pretty much all season,” he continued.

Doyle, whose father Scott was a junior at City before a back injury ended his playing days, added it was a proud moment to lift the Premier League Two title after the home win against Tottenham as he is getting towards the end of his career as an academy player.

He said: “I have been lucky to win a lot going through the academy, both individually and as a team, including the FA Youth Cup last season and many big tournaments.

“Now I am looking forward to trying to replicate that with the first team.”
He has already made seven appearances for the senior side.

By virtue of his involvement in games, he has already picked up two winners’ medals in the Carabao Cup and he will qualify for another if City lift their first Champions League later this month.

He said: “Everyone is happy we have reached the final, which is a massive occasion for the club and the players.

“The job is not done yet and we are aware nobody remembers the team coming second in a final.

“For me it was great to be involved in pretty much all the group stage games but as players have returned from injury I have not featured in the latter stages.”

He added that being part of this first-team squad had helped his development “enormously”.

He said: “They are a special group of players, not only for their ability but for being humble people.

“I have learned so much from them and, as a youngster coming through, there is no better place to be as I focus on trying to break into the first team.

“Phil Foden is one of the first academy players to break through and has done fantastic. Young players should use Phil as a role model though you have to focus on yourself. It is down to you putting in performances.”

Premier League Two is a competition that replaced the U21 Premier League from 2016/17, with a greater focus on technicality, physicality and intensity to bring players as close to first-team experience as possible. The league is formed of two tiers, Division One and Division Two, with 13 teams in each, and the factor of promotion and relegation.

The 26 clubs who compete each applied for category one status in the Elite Player Performance Plan. There are 19 clubs from the Premier League, six from the Championship and one from League One.