‘Desperate’ for help as sewage ‘bubbles up’ 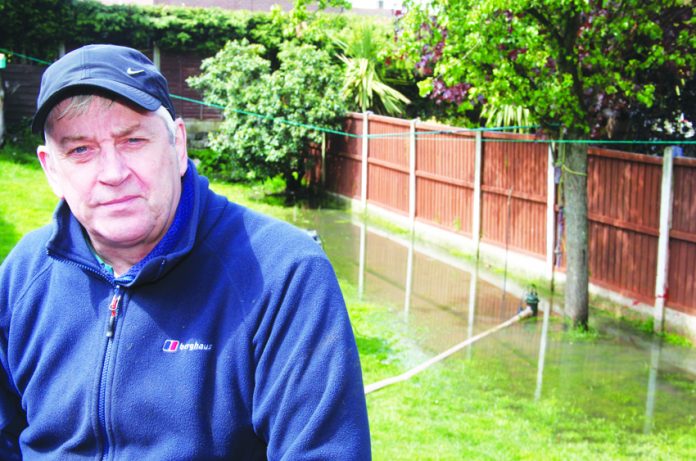 Residents of a Biddulph street were left “desperate” for help as sewage flooded into their gardens during heavy rain.

It was an all-too-familiar site for one couple living on Congleton Road on Monday, as they awoke to find that the grid by their back door had once again overflowed with rainwater and what they said was raw sewage.

Alan and Susan Jones told the Chronicle that they have been “passed from pillar to post” in trying to get a resolution to the problem, that has occurred on and off for more than a year.

Mrs Jones said: “I’m so desperate because we have got raw sewage coming up from the drains on the property as a direct result of the gully not being cleaned further up the road. It has flooded several times since August.

“The gully was blocked up after some roadworks were done last year and it still bubbles up, even if it’s just normal rain.

“If it’s heavy rain, the water flows down the road, through a neighbour’s property, and then across from them down to our property, which is lower down.

“It floods our drains and goes into the back garden. Then the drains start bubbling up with sewage – it’s literally sewage by our back door.”

Both their neighbours and Mr and Mrs Jones have reported the problem to various authorities, including utility companies, but have said that they “seem to get nowhere”.

“United Utilities came to check our sewage pipes in March, the last time this happened, and they told us that heavy rain was backing the system up,” explained Mrs Jones. “We reported it to Severn Trent, who passed it on to Staffordshire County Council Highways. That was the last report, but we have not heard from them at all since then.

“Someone did come out to look at the gully, we assume they were from the council’s highways department. He said that it is affecting all the properties and the gully wants cleaning, but that the council probably wasn’t treating it as a priority.

“We have reported it online and spoken to our local councillor, so I don’t know what else we can do. I am just passed from pillar to post. Cleaning the gully might not be a priority for them, but they don’t understand the effect it is having on us.”

Coun David Williams, Cabinet member for highways and transport at Staffordshire County Council, told the Chronicle: “We are aware of the issues on Congleton Road and will work with the water company to investigate the source of the problem.”

He said: “When new pipes were being put in on Congleton Road last year, one of the existing pipes was damaged, which is what caused this problem.

“I have been mithering for weeks to get it fixed. I was promised it would be done in April but it still hasn’t been. It has been reported and I have fought very strongly for it to be done.”

Coun Lawson said he raised the issue at a meeting of the county council’s Conservative group on Monday. Coun Williams was expected to give Coun Lawson an update on the situation today (Thursday).

Engineers from United Utilities, who were at Congleton Road on Tuesday, said that the problem appeared to be related to highways gullies.

A spokesperson for United Utilities said: “Our engineers are on site again today (Tuesday) to investigate reports of external flooding at several properties on Congleton Road in Biddulph.

“Extensive investigation has found no issues with our wastewater assets and we have no clean water assets in this area.

“However, there appears to be an unknown water source overwhelming the infrastructure. Investigations will continue to determine the water source and we will inform the relevant authorities to help get it resolved.

“In the meantime, we’d like to thank residents for their assistance while we look into this issue.”