Braving the shave to score for hospice following diagnosis 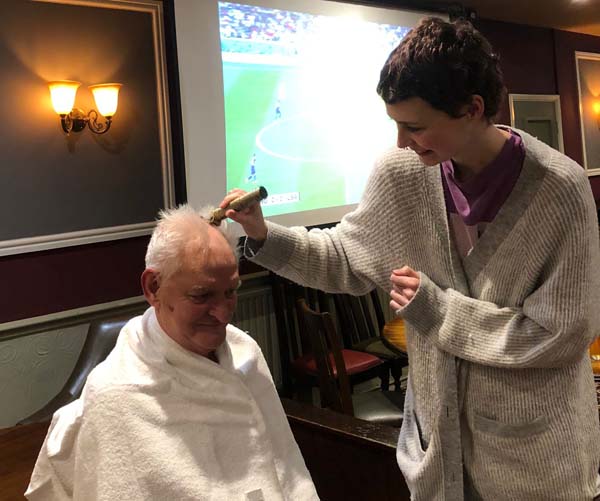 Just four weeks after being diagnosed with an incurable cancer, a Biddulph man shaved his head in a fund-raiser for the hospice he could be admitted to.

Stephen Forrester, (70), had the haircut at half-time during Friday night’s England v USA game, which was being televised at The Barley Mow, on Church Road, where he was cheering on the national side.

The granddad had been told a month earlier that he had small cell lung cancer, an aggressive form of the disease that has spread to his bones in four places.
He received the diagnosis just as his 20-year-old daughter Mikaela went into remission from Hodgkin’s lymphoma.

Mr Forrester’s wife, Sue said: “Stephen was fine and there were no signs of any illnesses until he coughed up a small amount of blood for two days running, and everything just went crazy from there.

“They thought it was a blood clot at first, but then that was ruled out. Within three weeks, he’d had a chest x-ray, a CT scan, a biopsy and a PET scan. Stoke Hospital has been amazing.”

The couple, who are originally from Somerset, had been celebrating their daughter being given the all-clear for cancer in August, so the news that Mr Forrester would have to face chemo and immunotherapy was a blow.

However, his family was optimistic this week that – while it is not curable – it could be contained from spreading any further, as his treatment is due to start next Friday.

The head shave at the Roaring Meg raised almost £400 for Douglas Macmillan Hospice, in Blurton, the only specialist palliative care provider in north Staffordshire for adults with a limited life expectancy.

Mrs Forrester, (60), continued: “The doctors told him that his hair would fall out, so it was a last-minute decision for him to shave his head at half-time and raise some money for the Dougie Mac, which we chose because at some stage we’re going to need them.

“It went amazingly and there was a great atmosphere in the pub. People were putting so much money in the bucket.”

She especially thanked Tina Gardner, whose handmade Christmas decorations were auctioned off during the evening.