Donation coincided with their 35th birthday 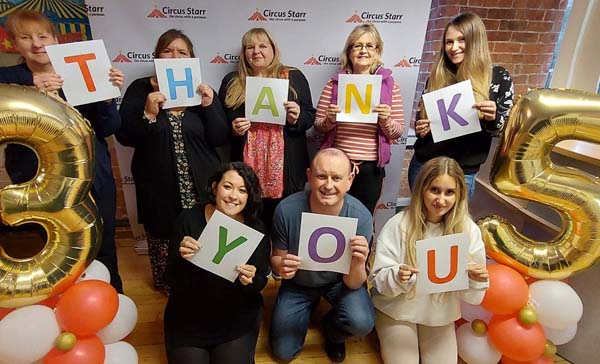 The donation is the latest in a six-year long collaboration, bringing the overall donation total to £93,560.

The donation came through the sale of 74 Motability vehicles in July, August and September, and coincides with Circus Starr’s 35th anniversary, which it celebrated early in October.

The organisation began in 1987 with aim of bringing the magic of the circus to those who usually would usually miss out on it. Since then, Circus Starr has toured the country, building a network with schools, charities and hospitals so that they are able to invite vulnerable, disabled children and their carers to experience the shows.

For every vehicle sold on the Motability Scheme, Swansway Motor Group donates £20 to enable a child and their carer to attend a Circus Starr show.

Sarah Hall, communications and engagement manager at Circus Starr, Said: “We would like to say a big thank you to Swansway Motor Group for its ongoing support. The latest donation will fund tickets for vulnerable children and their families to make new, exciting and treasured memories.”

The family dealer group was founded in 2003 by Michael Smyth and is now run by him and his three sons, David, Peter and John.

Mr Smyth said: ““We are delighted to be able to support Circus Starr with another donation through the sales of our Motability vehicles. Their fantastic work puts smiles on the faces of children and their families across the UK and that has been seen during their autumn tour. We are proud to support them in their mission.”