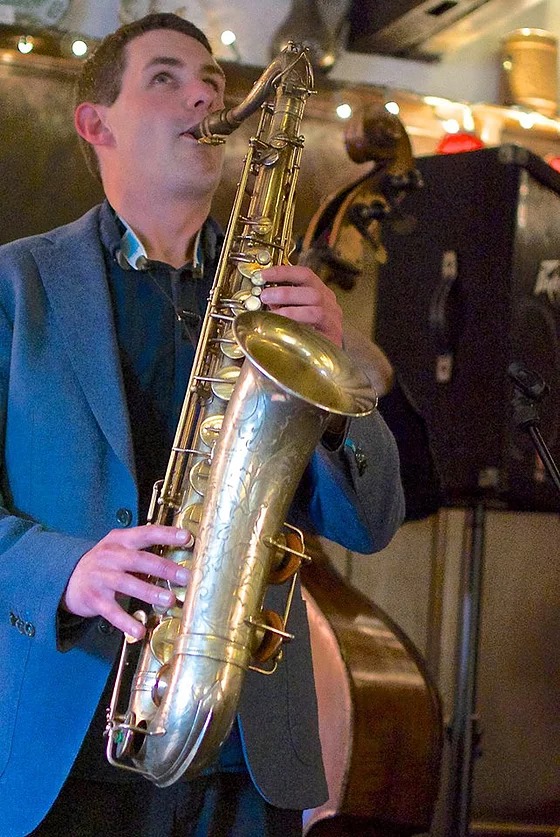 Lucas is renowned on the Northern jazz scene as being a melodic and lyrical trumpet player. His earliest experiences as a jazz musician were spent with the Wirrorleans Jazz Band playing in Ma Boyles Pub in Liverpool, before beginning to perform with other Dixieland bands. With a versatile sound spanning a straight-ahead American Songbook repertoire through to traditional New Orleans, Lucas is sought after by a succession of quality musicians and bands.

He has appeared at Jazz Festivals such as Keswick, Upton-upon-Severn and Pershore, which included four years with the American piano player Jeff Barnhart and his 18-30 Band at the Keswick Jazz Festival.

Byrne has a reputation as a torchbearer of the jazz tenor saxophone tradition, with a warm sound and understated approach inspired by the likes of Lester Young and Ben Webster. Byrne has performed alongside leading British jazz musicians including Alan Barnes, Digby Fairweather, Bruce Adams and Roy Williams.

Leading the house trio on piano is no stranger to the club, Dave McGarry. Having studied at Leeds College of Music in the mid-80s, McGarry’s busy career as a composer, performer and educator has seen him working for almost 20 years in music education, as well as 10 years as musical director at Alton Towers. His soulful, high-energy piano style makes him much in demand for jazz and function gigs all around the Midlands region.