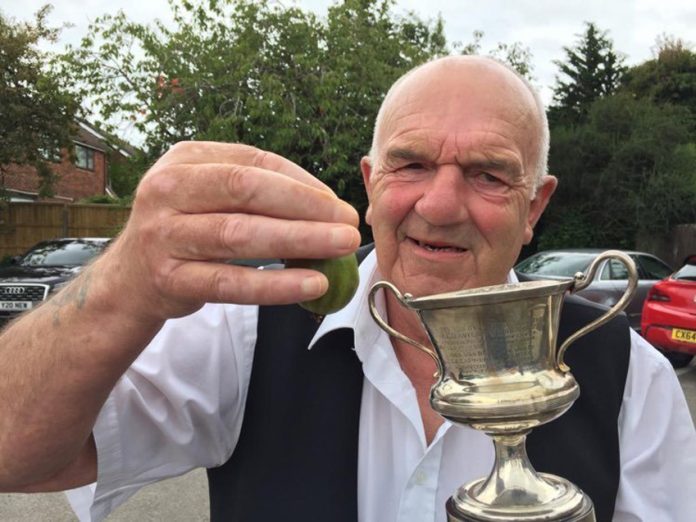 Gooseberries the size of golf balls will be in short supply on Saturday when the showing season begins in mid-Cheshire villages.

Veteran growers say heavy berries will be hard to find this year and weights are likely to be low due to a season of fickle weather (writes John Williams).

The changeable weather has meant berries have been bursting even before reaching a significant size and few are expected to achieve more than 25 pennyweights.

Some growers have found mildew also a particular pest while others have experienced none this year – and nibbling squirrels and moles have added to their woes.

And for long-time grower Terry Price the season has started badly even before the first berry is weighed after he claimed his prize-winning trees were “nobbled” when they were sprayed with a poisonous chemical.

Mr Price, the 76-year-old president of the Goostrey show, was last year the dark horse, romping home with the heaviest specimen of the day to win the trophy for premier berry.

His Millennium of 32 pennyweights 19 grains swept the board to gain the top prize for the 10th or 11th time in almost 60 years at showing his berries in Goostrey and other shows.

Now, he will be glumly sitting on the sidelines at the weigh-in at the Crown Inn, Goostrey, with only a handful of berries to enter for a token defence of his title. He claims the mystery poisoning happened three months ago when he noticed many of his 50 most precious trees growing in an enclosed pen behind his home at Twemlow Green looked sickly.

Within 10 days, 46 withered and died despite his best efforts in trying to save them.

“I have had them tested and this shows it was done with a spray of a formula that isn’t available to the public,” he said.

“They were all my best trees in the pen and only four survived but the berries are little and it will be another 12 months before they are fit for anything.”

Mr Price, who began showing aged 18, added: “I am not accusing anyone in our Goostrey show of being responsible for poisoning the trees but I have a rough idea who it might have been.”

He said at best he will have only a couple of berries to take to the show to defend his title but he will have fun watching others battling it out for the trophies.

Martin de Kretser, secretary of Goostrey Gooseberry Society founded in 1897 after an interval since the first village show in 1863, confirmed Mr Price had told him of his loss.

“Sadly, he has reported potential sabotage with the spraying of his trees with weed killer,” said Mr de Kretser. “Needless to say if this was another Gooseberry grower they would be banned for life, but I find it hard to believe someone would do that to Terry.

“I do hope that it wasn’t a deliberate act and just a mistake in using contaminated compost or accidental spraying with the wrong chemicals. It is easily done.”

Speaking of the show, he added: “It could be quite an open competition with many growers reporting difficulties including the loss of flowers in April due to the frost, with the coldest April in 60 years.

“Pests and predators seem more of a problem this year with stories that mice and squirrels have devastated pens, and even moles causing problems.”

He added: “With the show also being late this year, berries are ripening early and dropping and bursting. Saturday could be interesting with weights expected to be well down on previous years and we may see a new name on the premier berry board.

“But you never know, someone may still have a heavy set of berries to surprise us all.”

Shows are also being held on Saturday at the Crown of Peover, Lower Peover, Holmes Chapel (Victoria Club) and Lower Withington (Red Lion).

The Over Peover Show is on Sunday (1st August) at the Dog Inn followed on Saturday, 7th August by Allostock (Crown of Peover), Marton (Waggon and Horses) and Swettenham Club.

Visitors are welcome to attend Goostrey Gooseberry Show at the Crown Inn on Saturday, starting at 1pm. The show can also be accessed remotely on Facebook via the link @goostreygooseberry

The Egton Bridge Show, near Whitby, the oldest in the country, will be held on Tuesday, with berries on display from 2pm and a recently-formed show in Skillinge, Sweden, will also be held this Saturday.

The competition among growers to produce the heaviest gooseberry began in the 18th century and the oldest existing show is at Egton Bridge in Yorkshire, founded in 1800. They were once held all over the industrial north of England but, apart from the Egton show, only eight survive, all in Cheshire – Goostrey, Holmes Chapel, Allostock, the Crown of Peover, Over Peover (The Dog), Lower Withington, Marton and Swettenham Club.

The Blackden Trust, based at the home of author Alan Garner and his wife, Griselda, near Jodrell Bank, maintains the official gooseberry archive of the many named varieties of trees.