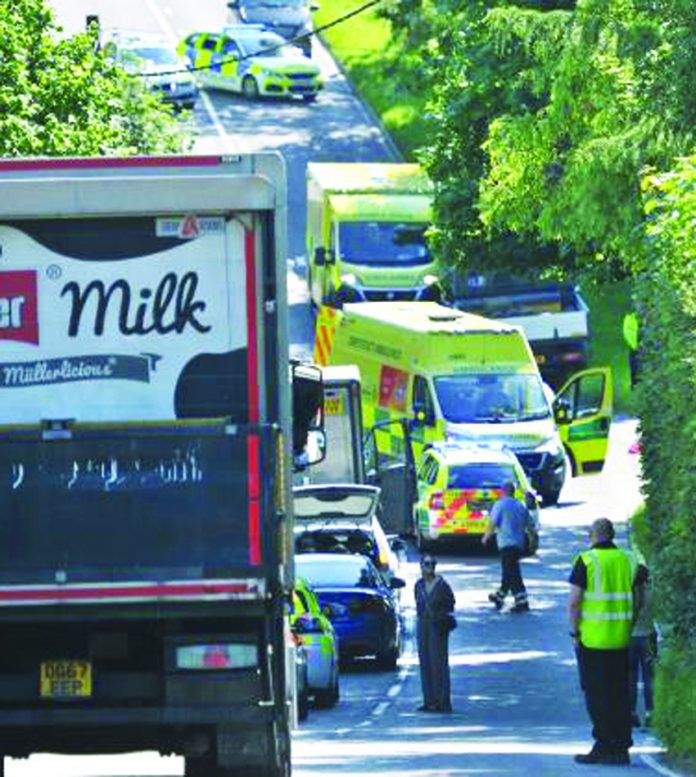 A cyclist’s death during an event in Goostrey and Twemlow last weekend has brought to a head a debate over road races and time trials taking place in the area.

One-time home of champion cyclist the late Reg Harris, the area has been a starting point for cycling events for many years (writes John Williams).

But residents are increasingly concerned that many cyclists, often clad mostly in black and travelling at speeds of more than 30mph, could collide with a walker or cyclist using one of the narrow lanes.

The cyclist who died in a collision with a van at the junction of Bridge Lane and Chelford to Holmes Chapel road, near Terra Nova School last Sunday, has been named by his family as 48-year-old Darren Maironis, of Tyldesley, near Manchester.

He was taking part in a time trial, and while there was an outpouring of sympathy to his family on local social media, there were also calls for events to be better controlled – or banned.

Locals say that even throughout the coronavirus pandemic lockdown, groups of cyclists have continued to ride through Goostrey from outside areas, raising alarm at the possibility of spreading the disease.

Now the issue of racing cyclists is to be raised at Twemlow Parish Council, and a number of residents visiting Goostrey graveyard have spoken of clashes with cyclists hiring the car park at the nearby village hall.

It is understood the Bridge Lane junction where the accident happened has been an area of concern discussed by Goostrey Parish Council because of the number of accidents in the vicinity, and an increasing amount of traffic using the lane.

One resident, Charles Brindley, who has lived all his life not far from the accident spot, spoke of his fright when he came to face to face with six cyclists on Bridge Lane one recent Monday night.

“I feel very sad and sorry for the cyclist and the van driver, but I think someone should have a word with the cycling clubs,” he said. “I was driving from my house down Bridge Lane when six cyclists came around the corner three abreast. I had to go into the hedge, or I would have definitely hit them.

“Someone needs to have a word with the clubs because they are very dangerous down the country lanes, and since the incident night I have had bad flashbacks of killing one.”

He added: “I’ve lived on Bridge Lane for 65 years and driving since I was 18, but when they came round the corner on my side of the road it really upset me.

“If I hadn’t gone up the hedge, I could have killed them. I have nothing against responsible cycling, but I don’t expect them to fill a country lane and not be at risk.

“It is only a few weeks ago that a group on Bomish Lane were all over the road. If cyclists want respect from car drivers, they need to be more respectful.”

Craig Brandreth, who edits Goostrey Parish magazine and is clerk to Twemlow Parish Council, had already logged the concerns on his agenda to discuss with councillors.

He said that he would be discussing with the council the suitability of using roads in the area for such events.

Simon Greenwood, of Chelford Road, said: “I have been overtaken by a group of four cyclists going down the hill at Bridge Lane. I was doing 30mph and they were exceeding the 30mph limit. That cannot be legal.”

Alice Lloyd-Griffith, a Twemlow Green resident who lives near the Twemlow Lane and A535 junction commented: “When they are racing, they don’t bother looking at the junction and just fly out. I have seen so many near misses they seem oblivious to and just carry on.

“I am afraid they will cause an accident in their haste and no road sense or courtesy at the junction.”

Another Twemlow resident, Tony Collier, was concerned about time trials happening every week on local lanes, and with bunched up cyclists “having no consideration” for other road users and pedestrians taking a country walk.

He said: “Last week, I almost had a head-on (collision) with a group of cyclists on the blind bend on Twemlow Lane just past Blue Slate Farm and had to take evasive action to which I received a mouthful of verbal abuse.

“The speed on Twemlow Lane should be restricted to 30mph, but as I understand it according to the highway code, there is no mention of the speed limit applying to road cyclists. As always in a collision, it is usually the car driver who is to blame.”

Ken Wedderburn said: “I have had run-ins with cyclists in the village car park when visiting my parents’ grave and been told I can’t park as they have hired it.”

Villager Jennifer Charlesworth added that she had been a victim of the same “disgraceful behaviour” when visiting her parents’ grave.

An investigation into the collision is ongoing and police have appealed for anyone who witnessed the collision – or has any information, which could assist with their enquiries – to come forward.

The driver of the van, aged 42, was arrested in connection with the incident and has since been released under investigation pending further enquiries.

Anyone with any information should call Cheshire Police on 101 quoting IML 1039437 or information can be passed online via cheshire.police.uk

• Reg Harris, who lived locally, was a member of Manchester Wheelers and described at his peak as Britain’s greatest track sprint cyclist.
He was born in 1920 and died still cycling, aged 72, after suffering a stroke near his home. He won two silver medals at the 1948 Summer Olympics and also won a British title at the age of 54.
Mr Harris, a familiar figure riding his cycle in the area until his death, won a world title as an amateur in Paris in 1947 and took two silver medals at the London Games before turning professional. He won the world professional sprint championship from 1949 to 1951 and again in 1954.
His startling comeback in 1974 to win the British the professional sprint champion was acclaimed as an amazing achievement even for an experienced cyclist of his years.