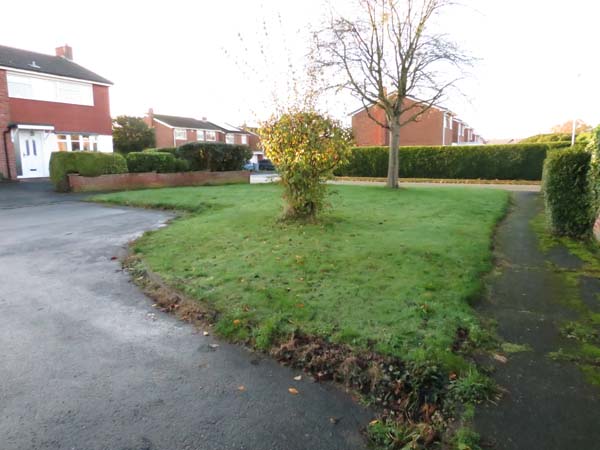 Green space on a West Heath cul-de-sac failed to sell yet again, despite the asking price being reduced to offers over £7,500.

The Chronicle reported recently how Penrith Court residents would oppose any plans to build a home on the grassed area, which is also adjacent to Windermere Drive.

The 177sqm piece of land was due to have gone under the hammer again in an online sale by Auction House on behalf of owners Bilton Land last Wednesday.

The Surrey-based company has also been attempting to sell other patches of green space and verges in West Heath.

Sale specifics for lot 177 included an aerial shot of the plot of land and a picture of a detached home with a caption saying: “An artist’s impression of a development concept (subject to all relevant consents).”

Anyone watching for the Penrith Court lot to come up at the last Wednesday’s online sale would have had a long wait. Proceedings began just after 9am and it wasn’t dealt with until around 7pm – and only then by way of the auctioneer saying “it’s not offered”. The sale had been withdrawn prior to the auction.

But it is understood that it was then put onto a four-day timed auction, which concluded just after noon on Monday – and there were still no offers.

A resident who had been following the auction told the Chronicle: “Guess what? No offers! Will they ever get the message?”

Les Jackson, of 5, Penrith Court, had previously told the Chronicle that he “could not see how anything could fit on there” because of the size of it and that “it was a case of buyer beware; residents here will oppose any plan to build on it”.

The drive of Marlene Kinder’s house at 6, Penrith Court, is right next to the land.

She had said: “It’s just so close, isn’t it? I’m not for it being sold at all; definitely not.”

“It’s difficult enough getting off my drive as it is, and family and friends park there when they come. A new house would be right up to my drive. I’m dead against it.”