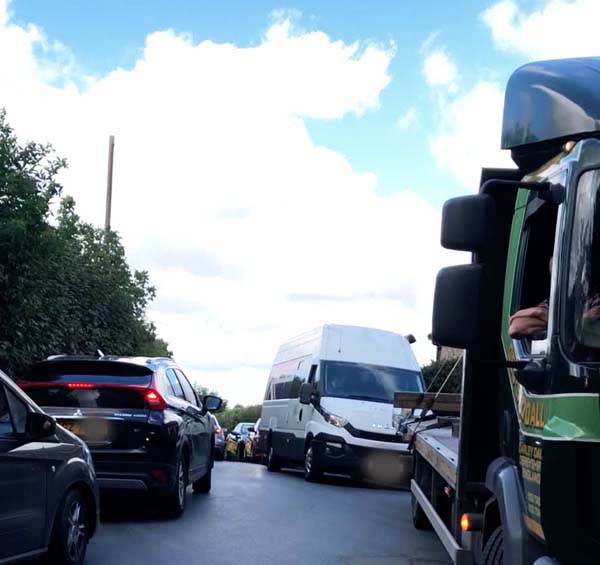 Sat nav directions have led to the “ludicrous situation” where HGVs are leaving the M6 and going into a small village, leaving residents unable to use its roads.

The traffic through North Rode, which has “significantly increased” since the opening of Wolstenholme Elmy Way (Congleton link road), has caused damage to grade II listed buildings, collapsed drains and creates “gridlock” during rush hour, as HGVs and cars are forced down single-lane country roads.

North Rode parish councillor Huw Williams, said: “Traffic surveys carried out by Cheshire East highways before and after opening of the by-pass indicate there are now more than 10,000 vehicles a week passing though the small lanes of the village, including more than 100 HGVs, representing a 50% increase.”

He added: “We now have the ludicrous situation where sat navs are directing traffic from the M6 towards Buxton or Leek along the by-pass and into the single-track lanes of North Rode, which are not designed for the volume or size of traffic now using them.”

Grade II listed Daintry Hall, which is currently a privately owned children’s day nursery, has been damaged twice in the last year by passing vehicles, leaving the stone wall around the property destroyed in places.

Coun Williams explained that the increase in traffic meant “pinch point” roads near the village became blocked by vehicles at rush hour as they try to avoid driving through Congleton and Macclesfield.

The problem is made worse if an HGV driver ignores the 7.5t weight restriction sign and attempts to pass through the village.

Coun Williams explained the impact that this has had on residents.

“Many are now very wary about driving along what used to be quiet country lanes and feel unable to walk along them. They are used regularly by local farmers, horse riders, walkers and cyclists, who are now facing a much higher risk.”

Following consultation with Cheshire Police and Cheshire East Council, North Rode Parish Council has appealed to residents to report HGVs whenever they spot them going through the village.

Coun Williams has asked residents to log the date, time, location and registration number, and report them to him directly. He will then pass the information on to the police.

He explained: “This will enable the local police unit to write warning letters and keep track of repeat offenders, and perhaps attend the location on targeted days.”

A spokesperson for Cheshire East Council said: “The council is currently considering a number of options to discourage through traffic from using Bank Lane and Church Lane in North Rode. This includes direction signage alterations and other measures to divert people from following their sat navs along these routes.”

To report an HGV using the lanes of North Rode, contact Coun Williams by email on huwwilliams200@gmail.com.

Do you have an opinion on this? Send a letter to the editor chronicleseries@aol.com