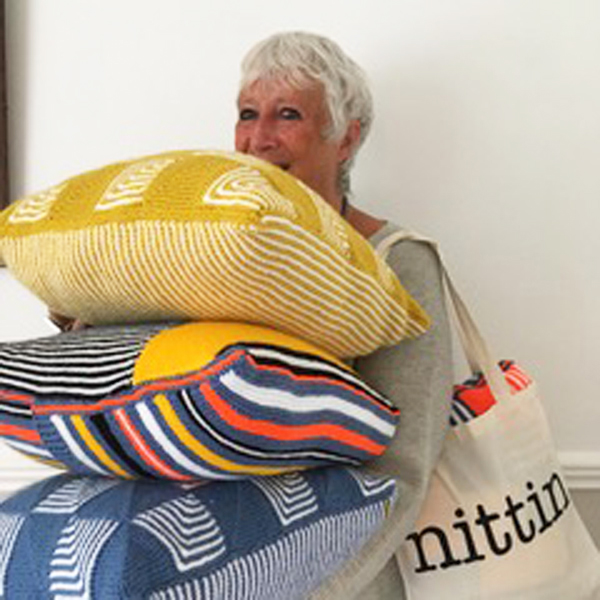 A business idea has clicked into place for a retired accountant who figured that she should rekindle her lifelong love of knitting.

Heather Davies of Rode Heath has started to create cushions specifically designed to be colour-coordinated with people’s homes.

Called Nittin, her new venture is a far cry from her childhood in Congleton where, at the age of six, her grandmother taught her how to knit clothes for her dolls.

Mrs Davies learned fast and was soon knitting for her pet poodle, the smartest dog in town, as she pushed him around in a doll’s pram.

Seeing how much their daughter enjoyed her craft of choice, mum and dad Dennis and Betty Bayley bought her a knitting machine and she would spend hours in the upstairs guest room, which Mrs Davies remembers pretending it was her “design studio”.

Eventually schoolwork and then studying got in the way. She married husband John, who had an accountancy business in Congleton, and Mrs Davies herself became an accountant.

“Although I always had a ball of wool and a couple of needles in the wings, I sort of lost the creative urge,” she said.

“In the intervening period I attended a couple of classes in Knutsford; one, oddly, was called
Extreme Knitting, which I incorrectly imagined would involve knitting while hanging off a cliff edge, but turned out to be using large needles and large wool. Another involved knitting a large snuggly jumper for an armchair.

“As you can see, I was never going to be the auntie who knitted boring jumpers for Christmas. I wanted to design and create funky stuff!”

More recently, she joined a knit and natter group, which meets at the Rhema Church in Rode Heath and makes hats for premature babies born at Leighton Hospital in Crewe, as well as hats and scarves for the homeless.

Then came the pandemic.

She explained: “Leighton wanted knitted red hearts to give to bereaved families, and the local playgroup for children of front-line workers wanted doll’s clothes. I loved it! I had rekindled my love of knitting; the needles were clicking again.”

It was during the pandemic that, like countless others, Mrs Davies, now aged 64, reassessed her life – and began to stitch together her new venture, called Nittin.

“I started to think about retirement. I realised it would give me more time to further my interest in design and creation of lovely things,” she said.

“I joined a Zoom course on modular knitting, where your project is made of building blocks and there is no sewing up to be done. I was in heaven, and I have not looked back.”
Mrs Davies had spent most of lockdown with her trusty double pointed needles in hand and started creating brightly coloured cushions.

“So much so I needed to sell some to make some space, so I could keep on knitting and make more!”

She added: “This is how Nittin was born. I have spoken to a couple of local outlets regarding a pop-up stall and with the help of a photographer friend, I am now building a website together with an Instagram and Etsy site offering my bespoke design service with a colour wheel to match your home and décor.”

Mrs Davies is currently working on some commissions, which need to be completed for Christmas.

“I am most happy with my needles in hand.”

She added: “I wonder how I ever went to work and why I was concerned about the retirement years!”