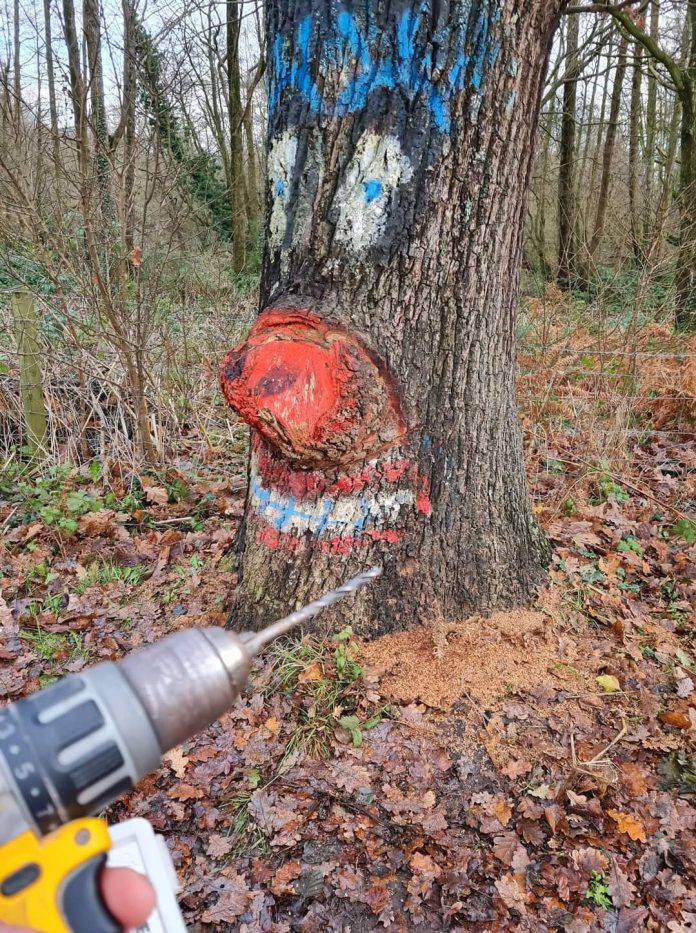 An Alsager man has been “overwhelmed” by praise after fixing the nose on the town’s iconic “tree with a face” after it was vandalised with a chainsaw.

Residents were “horrified” over Christmas when a photo was posted on a social media group showing the tree with its “nose” cut off. The post read: “So who is the vandal with the chainsaw?”

The oak tree with a painted face, at the edge of woodland on Sandbach Road North, is often used as a symbol for town events and its image used on flyers and posters. It has been familiar to passing motorists for decades.

Alsager Town Coun Phil Williams said of the famous tree: “It’s quirky and it always brings a smile to my face when I see it. I’m sure plenty of other people feel the same as well.”
Mark Birtles, (41), who has lived in Alsager all his life, told the Chronicle his reaction to finding out the tree had been damaged.

He said: “Honestly, my stomach churned. There was disbelief. I looked at the photos and then I got angry. It feels like somebody has damaged something personal of mine. It’s synonymous with Alsager. You find yourself looking at it when you walk or drive past out of habit, like you’re checking on a mate. I still can’t believe somebody has actually done what they have.”

Alsager residents reacted to the post on social media with anger, saying: “That’s a spiteful, despicable act of wanton destruction. The tree is synonymous with the village. Whoever has done it, I hope you’re satisfied.”

Another added: “Such an unnecessary act of vandalism. We’ve lived in Alsager for over 50 years and the tree has been a source of pleasure to our children and grandchildren.”
Coun Rod Fletcher struggled to remember the first time a face was painted onto the tree in the mid-70s.

He said: “It was a very simple version of a face, not as it looks today. In the early 90s, it was fading, and someone suggested we should have a local artist repaint it and I believe they did.”

Ben McNulty, a joiner, who has lived in Alsager all his life, grew up near the tree. When he saw the post on social media, he felt compelled to act.

He said: “I was just at work and saw it on my phone. I had the screws and the tools in the van, so I just stopped by on my way home and did it. It was just right place, right time.”

“I’ve been waiting for my moment in life, and this was it”, he joked.

He continued: “I got it in the right position and screwed it on. At first, I thought someone had stolen it, but then I found it resting up against the tree at the back.

“It was damp, so hopefully without strapping it on it will still be able to deliver nutrients through the rings.

“I’m just going to keep an eye on it for the next couple of years and see what it does. Eventually it will probably need a hardwood nose fitting and shaping. Then that can be painted red, and no-one will know any different.”

Mr McNulty didn’t think the culprit was an Alsager native.

“Having been a kid in Alsager, you know that tree is not to be touched,” he added.

Many residents reached out to thank Mr McNulty. He said: “I looked at my phone at the end of the day and saw 100-odd likes and comments and my phone was going mad. Even the guy in Costa called me the ‘hero of Alsager’; I just wanted to hide under a rock!”

Coun Williams added in response to the social media post: “Well done for fixing it.

“Alsager has a great community spirit and dreadful though this incident is, it’s good to see that there are decent people around who put things right and do things for the benefit of others.”