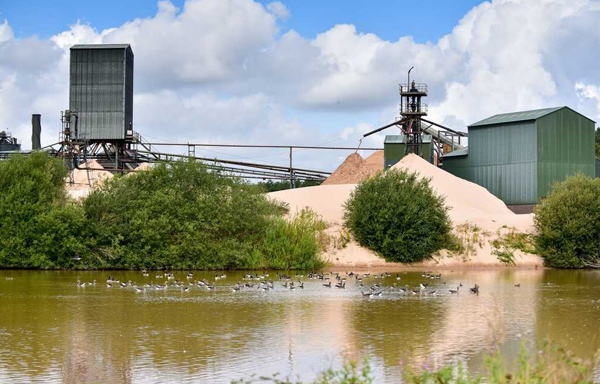 A quarry firm is preparing a planning application for the extraction of 3m tonnes of industrial sand from a farm near Congleton over the next 15 years.

Sibelco’s proposal includes the construction of a 2km underground pipeline through which the sand would be pumped from the new quarry at Somerford Farm on the A54 Holmes Chapel Road to its existing site at Bent Farm on Wallhill Lane in Brownlow, to avoid an increase of HGVs on local roads.

The new site would replace Bent Farm Quarry where the supply of sand is “nearly exhausted”.

During November, Sibelco staged a 365-degree virtual planning exhibition online providing information about the proposal as well as environmental and ecological impact assessments.
A feedback form was available so that people could email their views about the impact the planned development could have and whether they support the continuing quarry of sand locally.

Sibelco has been extracting it for years in the Congleton area for more than 50 years including West Heath Quarry in the 1970s, now Astbury Mere, Bent Farm and Brownlow Farm.

The virtual consultation explained that silica sand was used in a wide range of daily applications and was classed as a “mineral of national importance”.

It added: “Cheshire sands have long supplied industries nationwide and the proposed development seeks to continue this long association.”

The sand from Somerford Farm would be used in coloured bottle and container glass, by the military and aerospace industries and in sports and leisure, such as football pitches.
Somerford Parish Council has not yet discussed the proposal as it is still a “scoping review,” but it is due to hold discussions about it with Brereton Parish Council in the near future.
Sibelco aims to submit a planning application to Cheshire East Council in early 2023.

The agricultural land for quarrying sand at Somerford Farm measures 27 hectares.
The proposed mineral extraction area is bound by clusters of buildings to the east including Somerford Farm, Somerford Business Park, an equestrian veterinary practice, the A54 Holmes Chapel Road to the north and agricultural and to the west and south including Lower Medhurst Green Farm.

The proposed pipeline route is bound by agricultural land to the west and the recently
completed Congleton Link Road to the west.

Sibelco said there were no public rights of way running through the proposed mineral extraction area.

It said in years to come the restored site at Somerford Farm would comprise an 8m deep lake and surrounding areas of reinstated agricultural grassland, hedgerows, individual trees and woodland blocks as well as a wildflower meadow.

Sibelco said there would be no increase in HGV numbers as a result of the proposal and were expected to remain at similar levels to those experienced today.

Hours of working would be 7am-7pm weekdays and 7am-3pm on Saturdays.
An air quality and noise assessment would be carried out as part of the application.

The company pointed out that existing operations were undertaken in accordance with planning conditions, which were designed to ensure that operations did not result in any unacceptable impacts from dust emissions.

It added that ongoing noise monitoring at the application area had demonstrated that the existing operations had “consistently been in full compliance with the imposed noise criteria, indicating that the noise management and mitigation measures employed by Sibelco are effective”.

An environmental assessment said the hedgerows or ponds lost to the development should be replaced. It added that great crested newts were recorded off site and were likely to be affected by the development proposals.

No evidence of roosting bats was identified but the assessment found that the site was of local importance for “foraging and commuting” bats and so maintaining green corridors such as hedgerows or woodland “will be important for maintaining the favourable conservation status of local bat populations”.

Two disused badger setts were identified within the site boundary and a badger survey will be required before any work starts to ensure no setts have been built that could be affected by the development.

A feedback form for people to email their views about the plans includes questions such as “How close are you located to the site?”, “Do you feel the proposed development will have an impact on you and your day to day life?” and “Do you support the continued extraction of silica sand in Cheshire?”.

Coun Geoff Bell, chair of Somerford Parish Council, told the Chronicle: “We recognise the importance of the sand quarrying industry to the area, and we will be examining the impact on local residents, especially from a traffic point of view. But bearing in mind that the sand is to be carried back to the Bent Farm site through an underground pipe, we are hoping it won’t cause any traffic problems.”