Tom Petty Live at the Fillmore 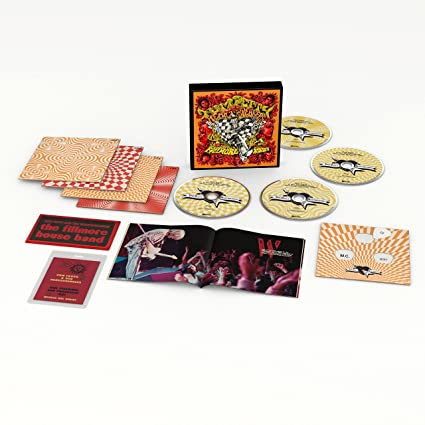 We received this as a stream before getting the full album and it all seemed a little too much, 72 tracks (count ’em! 72!) of Petty in 1997, playing a residency at the eponymous venue in San Francisco, initially 10 shows then 20 as tickets sold. Even bigger than Peter Kay.

The aim was to create the luxury to play more than the hits, so what you get is the band recreating the tunes that they loved, and which influenced them. Some fans clearly went to more than one show – we assume the setlist changed each night – and Petty calls out to them on this recording, comprising the best of the last six shows.

When you’ve got the time to listen and not just stream, it’s a far better experience. You can only conclude that come night 20, Petty and the Heartbreakers were pretty much the best live band on the planet.

You get monster versions of some hits – the band had been playing for at least 12 nights when this was recorded, so they’re matchfit for anything – from Runnin’ Down a Dream at track three (“We’re the house band at the Fillmore” jokes Petty at the end) to Alright for Now at 71 and Free Fallin’ at 64 – after the latter is a run of Johnny Goode, Satisfaction, Louie Louie and Gloria, and Petty’s own Mary Jane’s Last Dance (which sounds like the last song of its night and is 10 minutes long) and Alright For Now to boot. Gloria has a long spoken section from Petty in which the premise of songs that see men approaching random women is turned on its head, predicting the #MeToo movement: “I’ve got more to do that talk to a man who approached me on the street, you and your raggety tennis shoes… I want a man with goals,” complains Gloria. “Do you know how politically incorrect it is to whistle, yell and stomp and chase a woman down the street and ask her name?”

There are some guests; John Lee Hooker pops up at one point and is mesmerising, as does Roger McGuinn. It’s true it’s not all classic – songs such as Call Me the Breeze (JJ Cale) are decent and well played but probably most loved by the band on the night (though Benmont Tench gets a lovely solo that Jools Holland would die for).