Tom Gregory and the Dust and Mischief Band: Rejoiced Much 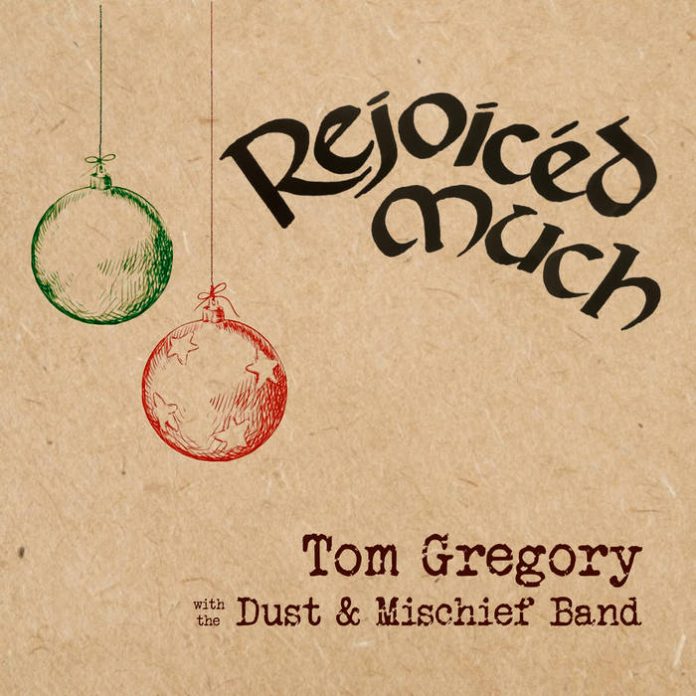 This came out last year but fell down the back of a desk (sorry, Tom) but it’s a Christmas record and one festive season is as good as any other.

While it IS a Christmas album it’s one that fans of standard folk / rock can probably wheel out once the tinsel has gone, as it stands up as a decent trad folk album, too.

The opener is The Wren, a jolly and upbeat dance tune (reel or jig, one of that type) and takes the opening line of the traditional lyrics (“The wren, the wren, the king of all birds / Caught himself within the furze” but ends up as plea from a band playing live for the audience to put money in the hat, inspired maybe by the trad lyrics’ closing lines “I have a little box under me arm / A penny or tuppence would do it no harm.”

We were delighted with the next song: Seven Good Joys of Mary is a song by Canadian folk band Great Big Sea (singer Alan Doyle’s autobiography is a good read, taking him from the fishing village of Petty Harbour, Newfoundland, to being a famed singer). Again, it’s religious lyrics (“The first good joy that Mary had, it was the joy of one / To see her own son, Jesus Christ, when he was first her son”) but it’s also a decent folk song, of the type favoured by men in beards standing on one leg and looking serious.

Cranbrook is next, which all churchgoers will know as Northampton, a hymn tune composed in the 1790s or early 1800s by Thomas Clark (1775–1859) and the rest of you will know as On Ilkley Moor Baht ‘at. The lyrics are While Shepherds Watched Their Flocks By Night, apparently once known with that tune but now not so much. Again, the lyrics matter less than the lively dance folk tune.

We Googled Gregory and he works for a social enterprise based in Hampshire – so he could have Southampton links, which would explain the nautical feel to the album; it all sounds like the music sailors would have danced to in days of yore (Gregory also dances with Winchester Morris Men). Two songs have Wassail in their title; Wassail is spiced cider, drunk during wassailing, the procedure of drinking cider and going door-to-door singing, a fun event that seems to have been replaced by carolling (we should all start drinking Merrydown and wandering the streets singing at Christmas).

The album has more of a feel of a traditional folk party album than the modern concept of a Christmas album. A decent album; you’ve got to like your folk, though.