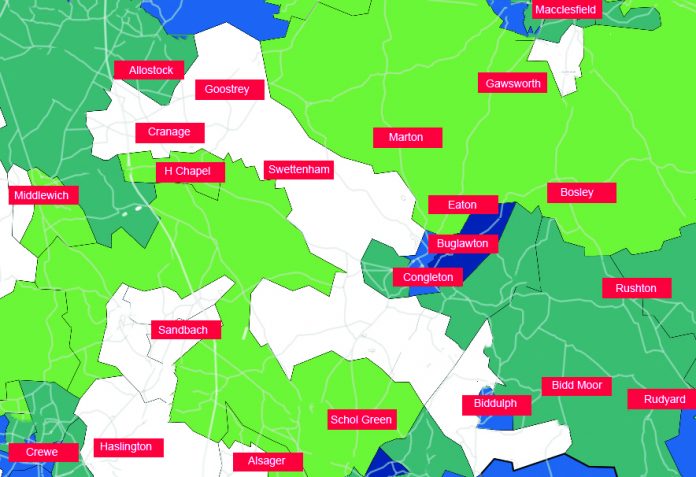 As the national infection rate for covid fell to 59 cases per 100,000 people, the latest figure as the Chronicle went to press, Congleton remained a stubborn holdfast of higher rates – with Biddulph also bouncing back up in infection rates. This is despite the fact that a large swathe of the area is now seeing lower rates, either below three cases in the last seven days and colour-coded white, or no more than 50 cases per 100,000.

Beartown, Biddulph have the blues

Over the border, Biddulph Central, which runs from Washington Close to Mayfield Close and includes Tunstall Road, St John’s Road and Moorfield Road, reported 15 new cases, up 12, its rolling rate rocketing from last week’s 35 to 177 cases per 100,000.

Endon and Brown Edge also remains high, its nine new cases a drop of one but its rolling rate 139.

Congleton Town had only nine new cases, down 12, its rolling rate dropping from 293 to 126 – still twice the national average.

The Hightown, Mossley and Timbersbrook area, where cases had been higher for some weeks, is now seeing a fall: down three last week and down six to four new cases this week, a rolling rate of 74 – still above the national average but well below last week’s 186.

Congleton West Heath saw six new cases, down two, its rolling rate down from 116 to 87, still over the national rate.

A number of areas are now – even if temporarily – basically covid-free, with fewer than three cases. The Government suppresses figures for less than three cases to avoid identifying individual people – where a hamlet appears on the national map, it indicates a patient in that area.

Up in the north, both Knutsford North and South recorded fewer than three cases, though the town sits like white jam in the Mobberley, Plumley and High Legh doughnut – an area that includes Rostherne, Lower and Upper Peovers, Grotto Lane near Blackden Heath, and Marthall – with its 15 cases and rolling rate of 125.
Working south, also with fewer than three cases are so white on the map, is the large Cranage and Goostrey area, which stretches from Byley to Roe Park and Smallwood; Middlewich West (although Middlewich East saw three new cases, rolling rate 37); Sandbach Heath; Sandbach North; Sandbach, Ettiley Heath and Wheelock; Haslington and Weston; Alsager West (although Alsager East recorded three cases, a rolling rate of 46); Macclesfield South and Lyme Green; Madeley and Betley, and Biddulph North and Brown Lees.

Indeed, with the exception of Eccleshall and Yarnfield, the white, fewer-than-three area now runs from Sandbach down to Highley and Ditton Priors, Bridgnorth.