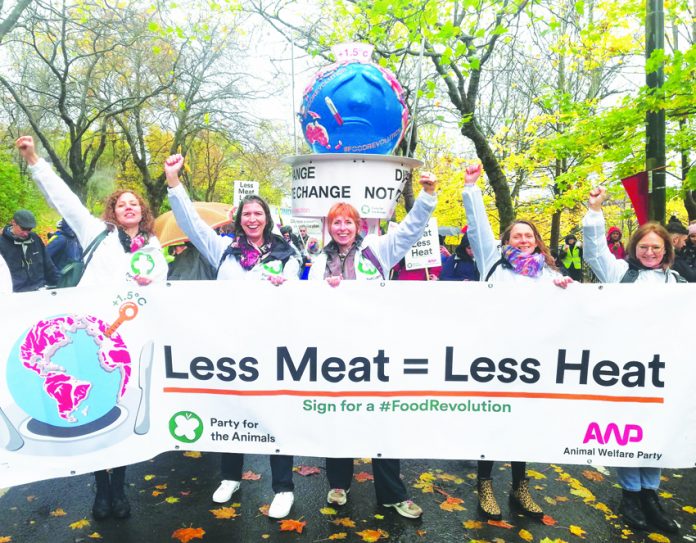 An Alsager town councillor has returned from four days at the Cop26 summit in Glasgow where she was a speaker at various fringe events around the climate conference.

Coun Jane Smith, who is deputy leader of the Animal Welfare Party, was part of the Fridays for Future march led by Swedish climate activist Greta Thunberg as well as the Copout26 march, which drew more than 100,000 protesters.

The Animal Welfare Party also co-hosted, along with its Dutch sister party PvdD, a sold-out international fringe conference around global transition to plant-based agriculture, which included in-person and online speakers from Uganda, Sweden, Ukraine, Nigeria, Lebanon and Montenegro as well as Prof Joseph Poore from the University of Oxford. The event was live-streamed to an audience across 28 countries.

Coun Smith said: “While the agreements from the leaders at Cop26 are predictably disappointing, the energy of the thousands of people who descended on Glasgow to press for action was very inspiring.

“I also met a number of environmental activists and land guardians from the Amazon basin whose testimonies were extremely moving, and it’s tragic that Cop26 didn’t give representatives of indigenous communities who are at the very front line of climate breakdown a real voice in Glasgow.”

She added: “For us at Animal Welfare Party, it was important to be there to highlight the intrinsic links between intensive animal agriculture and climate breakdown, which just isn’t being talked about in any meaningful way at Cop26 because the related corporations lobby politicians so aggressively.

“Just as many attendees were from the fossil fuel industries, very many were from multinational animal agriculture concerns with a vested interest to keep driving deforestation, pollution and emissions through intensively farming animals.

“I completely agree with Greta Thunberg that the real leadership is being shown out on the streets. At this very late hour we unfortunately can’t rely on governments to do what’s right for life on this planet and I would urge people to challenge elected officials at every move around decisions that are made without due regard for climate change and environmental degradation.”