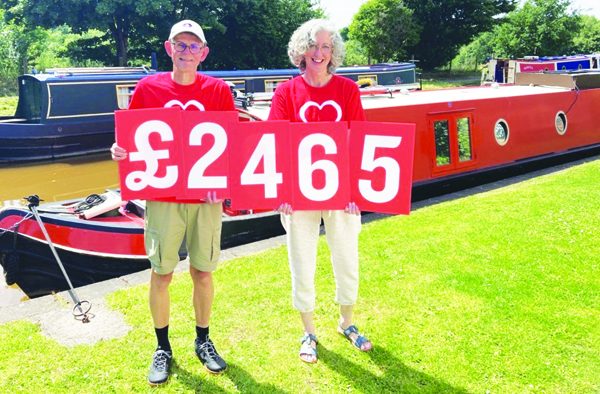 An Alsager man who underwent open heart surgery has walked more than 80 miles in eight days for charity.

Peter Holdcroft, (58), recently raised almost £2,500 for the British Heart Foundation with the walk, dressed in clothes from the 1980s and with his partner Penny Gilchrist.

The insurance broker, who is a keen runner, was diagnosed with a faulty heart valve as a teenager and it was not until he fell ill will with pneumonia in 2015, while in his fifties, that it caught up with him.

Mr Holdcroft had developed an abdominal aortic aneurysm, which is a swelling in the body’s main artery. The condition can be dangerous if not spotted early on, as the aneurysm can get bigger over time and burst, causing life-threatening internal bleeding.

Four years ago he went under the knife at Royal Stoke Hospital after surgeons chose to replace his faulty heart valve with a mechanical one.

Mr Holdcroft said: “It was challenging to be told I’d need open heart surgery. I remember it was the first time in my life where I thought of my own mortality.

“The recovery afterwards had its ups and downs. I wanted to get back to running, exercise and work, but I didn’t have the same energy or stamina as before my surgery.

“The biggest challenge for me is that, when it comes to running, I’m still nowhere near the level I once was. I don’t think I’ll ever get back to that, but I continue to enjoy trying.”

He continued: “We’ve been completely overwhelmed with everyone’s generosity, and we want to say a big thank you to everyone who has donated.

“It’s incredible to know that this money will help fund the foundation’s vital research.

“Without medical research, I wouldn’t have been able to get the treatment I did – so to know this could help others like me is so inspiring.”

Since his heart surgery Mr Holdcroft has completed a 5k Park Run, and almost 12 months to the day after being on the operating table, he ran the Nottingham Christmas half marathon in just under two hours.

This time around the couple took on local walking routes and split the distance over eight days, while wearing “bright” Lycra clothes.

Speaking about the fundraiser Miss Gilchrist added: “It was a lot of fun – on the final day, Peter was going dressed as Freddie Mercury and I was in my colourful tutu, but we decided to swap outfits, a challenge set by a supporter on one of the daily walks.

“What we found most inspiring was that complete strangers would approach us during the walks and tell us how they were affected by heart conditions. On one day we collected £60 from strangers who chatted to us along the way.”