Impact on tip ‘nothing short of disaster’ 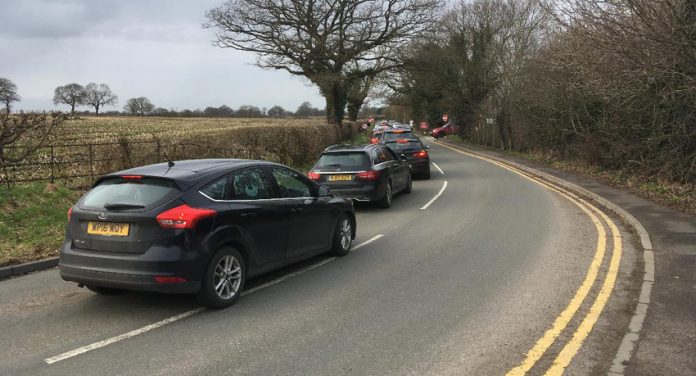 The impact on Alsager’s tip if the one in Congleton closes “will be nothing short of disaster”, a councillor has warned.

A decision will be made next week about the future of Congleton’s Household Waste and Recycling Centre as Cheshire East Council looks to begin a new operating contract for its eight sites across the borough. The existing contract runs out in 2023.

The authority’s lease on its Barn Road site in Congleton expires later this year and will not be renewed, leading to fears that closure will put more pressure on Alsager’s and Macclesfield’s tips, the nearest alternatives.

Police in Macclesfield recently commented on the build-up of traffic waiting to enter the tip on Congleton Road, while traffic already backs up around the bend on Hassall Road as drivers wait to dump their rubbish at the Alsager site.

This week, Alsager Lib Dem town councillor Derek Hough said: “Congleton is a big enough town to warrant its own tip and the effect on Alsager’s will be nothing short of a disaster.

“Traffic queues to get to the tip down the whole of Hassall Road, you cannot get by without running the risk of traffic coming the other way.”

Coun Hough added: “It would be a disaster both for those using the tip and those working there.

“It gets absolutely full up and people get bad tempered and take it out on staff.”

Alsager Coun Rod Fletcher, leader of the Lib Dem group at Cheshire East, said: “I am very concerned about the proposal to close Congleton tip without a replacement site being provided. Many people in Congleton could come to Alsager. Sometimes traffic already queues waiting to access Alsager tip which necessitated putting up a queuing traffic sign on Hassall Road prior to the bend.

“Should people come from Congleton they would probably use Pikemere Road, which has become busier due to diverted traffic because of the stupid active travel Lodge Road scheme which the Labour Cabinet Member (Coun Laura Crane) has so far refused to listen to Alsager people and end it.”

Referring to Congleton’s tip, Coun Fletcher added: “The current Independent/Labour and previous Conservative administrations have been aware that the contract on the current site ends in 2021 and appear to have done very little, if anything, about finding a replacement.

“The consultation also considered closing Alsager, Bollington, Middlewich, and Poynton Tips. 97% of the 10,000 plus people who responded were against these closures.

“While the Liberal Democrat Group opposes the closure of any further tips in Cheshire East, I would like to see a final decision deferred until the committee system comes in when a truly democratic debate could take place.”

Cheshire East is due to axe the Cabinet-style of local government and revert to the committee system.

The recommendation to Tuesday’s Cabinet meeting is to: note that the lease on the current Congleton Household Waste Recycling Centre expires in September 2021; approve the procurement of the new contract; and agree that the Congleton site will not be replaced while this procurement process is undertaken.

An environmental appraisal report concludes that the residual impact of closing the Congleton Household Waste Recycling Centre ranges between “minor beneficial to minor adverse” and makes several suggestions to reduce these impacts.

The council will monitor usage and consider measures to minimise congestion at Macclesfield and Alsager sites and look to introduce a change in traffic flow within the site boundary at Macclesfield to accommodate any further traffic.

It is noted however that existing covid social distancing measures at the tips is creating longer queues at some peak times that would be expected in normal operational times.

Coun Nick Mannion, Labour representative for Macclesfield West and Ivy, who is the Cheshire East Cabinet member for environment and regeneration, said: “If the decision is taken to close Congleton’s Household Waste and Recycling Centre the capacity of the other waste transfer sites in Cheshire East will be significantly increasing as they will not be operating under covid restrictions, and I will be seeking reassurances about the transport side of things.”

Referring to the other week when police tweeted about queues at Macclesfield tip he said: “That incident was not unique to this area and was repeated at sites across England. The weather was pleasant, and queues were reported all over the country.

Because of social distancing the operators strictly limited vehicles on site at any one time.”