Residents ‘let down’ over footbridge plan 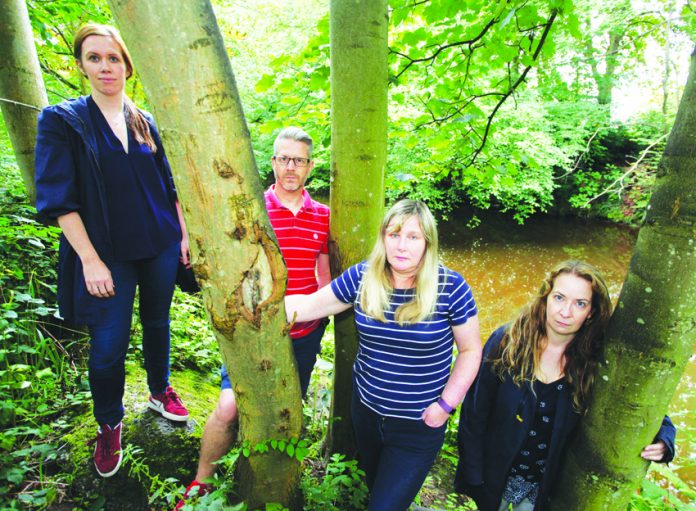 Residents of a Buglawton estate say they feel “let down by the council” as it continues to pursue plans for a bridge connecting their housing development with Congleton Park.

The bridge over the river Dane has been due for more than nine years as part of an agreement between developer Morris Homes, which built the Astbury Place estate, and Cheshire East Council.

But people living there say that it would cause more problems than it would solve, including parking issues, safety concerns and anti-social behaviour. The council has argued that developers must adhere to planning permissions. The bridge will also offer a short cut for pedestrians into the park.

Last month, construction teams completed investigatory work for the bridge – and there are fears that if those investigations find that the bridge project would be unviable, then the money given by the developer to the council could be lost altogether.

Glenys Bradbury, who moved to estate in 2016, said: “I feel that installing a bridge would be like using a sledgehammer to crack a nut. We all feel a bit let down by the council, we just don’t feel that it is listening to us.

“A footbridge should be two metres wide, which this is not, so it would not meet the regulations anyway. Cyclists couldn’t go across it because it would be dangerous.

“And then there would be the environmental impact of this massive iron bridge coming across onto our side of the river, which is a floodplain. It is just dangerous all round.”

Mrs Bradbury added that a grassy area near the river adjoining the estate, where the bridge would be built, had become a “valuable amenity” for residents who enjoy barbeques and social activities together.

“One thing we didn’t appreciate before we moved here was how good this grassy area would be for improving our community. We have used it for bank holiday parties, VE Day, and other events.

“But if there was a bridge running through the middle of it, we wouldn’t feel safe doing that with children.”

Debbie Duval, who moved to Astbury Place in 2018 with young children, was worried that the quiet residential nature of the estate could be affected by the bridge.

I wouldn’t know who was coming into the estate, so I would not want my kids playing out,” she said.

“We are already calling the police with noise complaints from the park, especially at the weekend.

“I try and ask myself what the benefits are if the bridge goes in. We would have access to the park four minutes faster. That’s it. What are the benefits for the wider community? I don’t see any.

“The council must know there are better uses for this money. I completely understand why it wants to hold Morris Homes and other new builders accountable, but there are better ways to do it.”

Resident Karen Budd agreed: “I walk to the park from the estate every day in my lunch hour, so if I can do that, it shows that it doesn’t take long to get there. We don’t need a bridge. Morris Homes polled the residents twice, and the responses were overwhelmingly against the bridge.”

Neil Taylor, who has lived on the estate for seven years, said: “When we moved here from outside of the area, we thought the bridge would be a great facility into a wonderful park.
“But, after living here for a short space of time, it became apparent that as well as the benefits it would bring, there would be a number of disbenefits.

“Parking, for example, would be a problem; each house only really has space for a single car. Anyone from this side of the town would think, why drive all the way round to the park? They would just park their car on the estate.”

Mr Taylor recently met Coun Suzie Akers Smith, the borough’s cycling and walking champion, who has been calling for the bridge to be built for several years.

He suggested other projects that the developer’s money could be spent on instead of a bridge, such as a crossing on nearby busy roads.

Mr Taylor added: “Coun Akers Smith listened to the concerns of the residents and said that the council is intent on pushing the bridge through.

We had a good walk around the area and looked at Havannah Street bridge, Havannah Street, Mill Street and Buxton Road – we talked about the absence of a crossing in the area.

“The danger is if it turns out the bridge is not viable, then potentially the developer could walk away and there would be no money, so Congleton misses out.”

In response to residents’ concerns, Coun Akers Smith told the Chronicle: “The benefits to children accessing the park and residents walking into town are significant, because otherwise you have got to walk round on very thin pavements, and it will deter people from walking locally.

“The estate wasn’t built just for the residents, it was built for people to access the park.

The bridge was a requirement of the planning process, and the residents knew that when they bought their houses.

“The problem is that if we allow this developer to not deliver on the agreement, it allows other developers to challenge their agreements. It’s a very dangerous game to play.”

She added: “I understand the concerns, but I just don’t think that having a bridge would deliver them and, if they did materialise, we could put in measures to prevent issues like anti-social behaviour, such as a gate that is locked in the evening.”

A Cheshire East Council spokesperson said: “Under the conditions of the planning permission granted, the developer is expected to fulfil its obligation to construct a footbridge over the river Dane at the Astbury Place site.

All developers are expected to comply with section 106 agreements, which is a legally-binding agreement placing an onus on the developer to comply with specific planning conditions relating to a development site.

“Investigation work is taking place with a view to delivering provision of the bridge as soon as possible. Unless the agreement is rescinded, the council retains the power to pursue action that would compel the developer to carry out the work.”

A spokesperson at Morris Homes said: “Morris Homes is working with the local authority to deliver its planning obligation to deliver a pedestrian bridge from its completed development, into Congleton Park. We continue to have dialogue with all of the interested parties.”