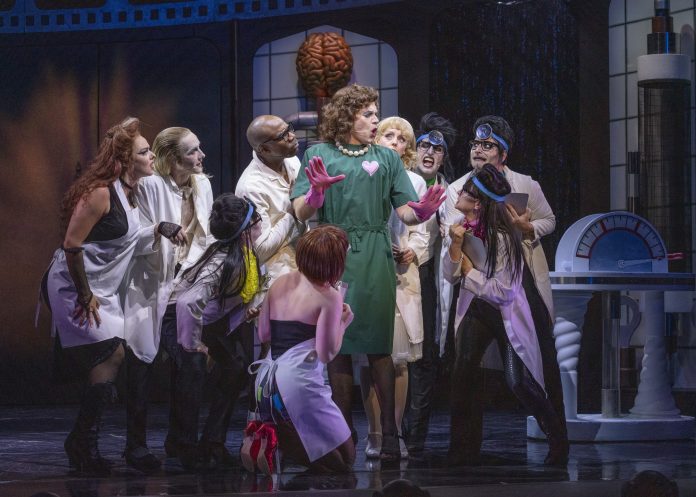 An experience as much as a performance, The Rocky Horror Picture show is an explosion of sci-fi, sexuality and music.

With a hugely successful film and decades of touring, Richard O’Brien’s tale of Dr Frank N Furter, the ‘transvestite from transexual Transylvania’, his creation Rocky, and the naïve college kids Brad and Janet who end up in his mansion after breaking down in their car is well known.

The soundtrack has been a huge hit, and there mustn’t be many people out there unfamiliar with The Time Warp. But while you may think you know what to expect, if you’ve never seen the show live then think again.

The cult classic enjoys a frenetic fandom. While it is probably not news that fans like to get in character for the shows, the level of audience participation is something else. Scientists, corset-clad men and women, and chamber maids mixed with theatre goers in their civvies to enjoy the electric atmosphere at The Regent. Pre-empting lines, hollering out banter for the narrator and stepping up for The Timewarp kept the laughter flowing and the tempo high. Especially the inspired light up ‘Janet’ sign flashed up by an audience member in time to Damn It Janet.

There may be a comic edge and a touch of chaos to the show but underpinning that is stellar performances from an immensely talented cast. Front and centre is Stephen Webb with a commanding display as Frank N Furter. His stage presence is huge and, brimming with charisma, he struts across the stage delivering a virtuoso performance.

There is room for everyone to shine in this show though. Haley Flaherty as Janet is fantastic, matching the character’s sweet naivety with a stunning, strong voice. Strictly Come Dancing winner Ore Oduba is excellent as Brad – he’s funny, engaging and has a great voice. Joe Allen’s appearance as the ill-fated Eddie may be brief but it is memorable, he steps into the shoes filed by Meatloaf in the film with aplomb before emerging later on with a complete voice and character change for a humorous portrayal of Dr Scott.

Playing the hunched, awkward Riff Raff can’t be easy but with a record run of performances in the show, Kristian Lavercombe clearly relishes the challenge. He never fails to make Riff Raff a focal point every time he is on the stage, injecting fun and a fascinating persona. Lauren Ingram is the golden hat-wearing Columbia, bringing well-acted craziness to this colourful character, while Suzie McAdam is impressive as the usherette opening the show (and ending it) with the wonderful Science Fiction/Double Feature, as well as hamming it up as servant Magenta. Ben Westhead flexed his muscles as the perfectly formed creation Rocky.

The true magic – and hilarity – of the audience participation though happened when Phillip Franks was on stage narrating the show. Suave and sophisticated in appearance, and delivery, this made the risqué retorts and colourful current affairs comments even more hilarious. Too colourful to repeat in a family paper, suffice to say there may have been some strong language in his expert handling of this legendary script and the plentiful banter.

The Rocky Horror Picture Show is certainly not your normal theatrical fare, and nor would the audience want it to be. It is a bona fide riot of music, mystical madness and edginess – and the content is definitely adult!

The vocals are second to none in the show. Every single member of the cast commands the stage and brings the songs to life, supported by the excellent band as they blast through show favourites including The Time Warp, Sweet Transvestite, Hot Patootie – Bless My Soul, Damn It Janet, Over at The Frankenstein Place and Rose Tint My World.