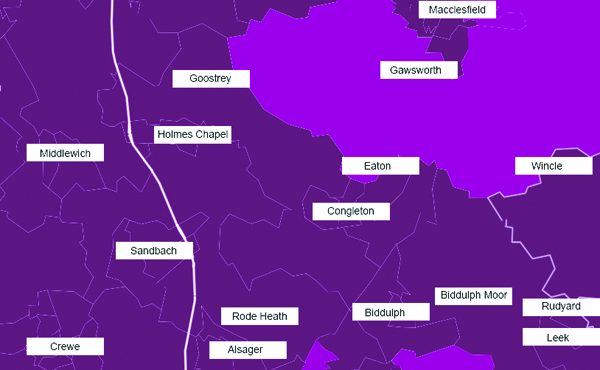 Covid infection rates plummeted across the area this week, with all areas the Chronicle serves dropping out of the highest bands of infection rates. Not so far away, the Bakewell area, which reaches out to Flash – and to rehash a lyric from Neil Young – fell out of black and into the blue. The lower blue banding for infection rates has not been seen for some time and hopefully will make an appearance locally soon.

Sadly, as infection rates fell, death rates were higher, nationally and in Cheshire East, although Staffordshire Moorlands recorded no deaths at all. Hospitalisations were also high: there were 133 people in Leighton with corona as per the latest figures.

Deaths
Across the country, between 12th and 18th January, there were 1,904 deaths within 28 days of a positive coronavirus test, an increase of nearly 15% compared to the previous seven days.

This was despite the fact that between the same two dates, fewer people had a confirmed positive test result – the total of 673,987 a decrease of 39% compared to the previous seven days.

Cases
As for cases, in Cheshire East between the 12th and 18th, 4,289 people had a confirmed positive test result, a decrease of 37% compared to the previous seven days. In the Moorlands, it was 1,482 people, an increase of 65%.

In the Moorlands, 190 people went into the care of University Hospitals of North Midlands NHS Trust with coronavirus, an increase of 0.5% compared to the previous seven days.

There were 155 patients in hospital with coronavirus on the 11th, seven on ventilators. The trust includes not just the Moorlands but Stoke and Stafford.

In Cheshire East, 49 people with coronavirus were admitted to Macclesfield District General Hospital between 3rd and 9th January, an increase of 58% compared to the previous seven days. There were 43 patients in hospital on 11th January, two on a ventilator.

Eighty-eight people with coronavirus were admitted to Leighton Hospital, an increase of 9% compared to the previous seven days. There were 133 patients in hospital on the 11th, one on a ventilator.

As we explain every week, the Government colour codes infection rates. Below three cases in a so-called middle layer super output area – the smallest area identified by the Government for counting – and it is colour-coded white. It’s a long time since we saw white. As the rates increase, the colours go from yellow (0-9 cases per 100,000 people), light green then dark (10-99 cases), light blue to dark (100-399) then light maroon to dark (400 to 1,599). Dark maroon used to be 800 cases and more but now it is up to 1,599 with a new colour – black – for cases of 1,600 and over.

The national seven-day rolling rate up to the 13th was 986 cases per 100,000 people, an astronomical figure compared to pre-Omicron days but down from a peak of 2,000 from the middle of the Omicron outbreak.

As stated at the start of the story, there are no local areas in the highest black banding, the nearest black zone being Tunstall.

Two areas were in the lower, lighter maroon zone – Gawsworth and Macclesfield Forest, the large area that reaches to Goostrey and covers Marton and Eaton, posted 110 fewer cases, with 74 new cases and a rolling rate of 762 in the seven days to 13th January. Last week, its rolling rate was 1,905.

The large Cranage and Goostrey area, which runs from Cranage and down to Nick i’ th’ Hill in Congleton via Swettenham and Astbury, recorded 62 new cases, a fall of 82 over the seven days and a rolling rate down from 2,055 to 891.

Just out of our area, the Mobberley doughnut, which circles Knutsford, saw 96 fewer cases, with 106 people testing positive and a rolling rate of 884. South Knutsford and Bexton saw cases fall by 95 to 54, rolling rate 806, while Knutsford North saw cases drop to 62 (-60), rolling rate 983.

Alderley Edge and Chelford had 81 new cases, down 69, its rolling rate 964. (We missed it out last week so can’t say what this was down from, sorry!).

Lostock and Wincham, which extends between Middlewich and Holmes Chapel, saw 82 people test positive, a drop of 81, its rolling rate down from 1,870 to 935.

The middle
The large Scholar Green, Rode Heath and Brereton area, which runs to the border with Staffordshire, scored 136 new cases, down 55, its rolling rate 1,227, down from last week’s 1,742. The national seven-day rolling rate is 986 cases per 100,00 people, don’t forget.

In Biddulph North and Brown Lees, 56 new victims tested positive, 72 fewer than last week; its rolling rate was down to 899 from 2,054 last week.

The national Zoe Covid study, which collects data via an app, this week said that there were now more cases of covid with cold-like symptoms than there were “colds”.

Zoe has added lower back pain as an option to the symptom list, based on preliminary data analysis of reports from its app.

The analysis found no clear difference in the symptom profile of Delta and Omicron, with only 50% of people experiencing the classic three symptoms of fever, cough, or loss of sense of smell or taste.

Loss of smell and taste has become much less common. It was in the top 10 symptoms earlier in 2021, and now it’s ranking at 17, with only one in five people experiencing it.