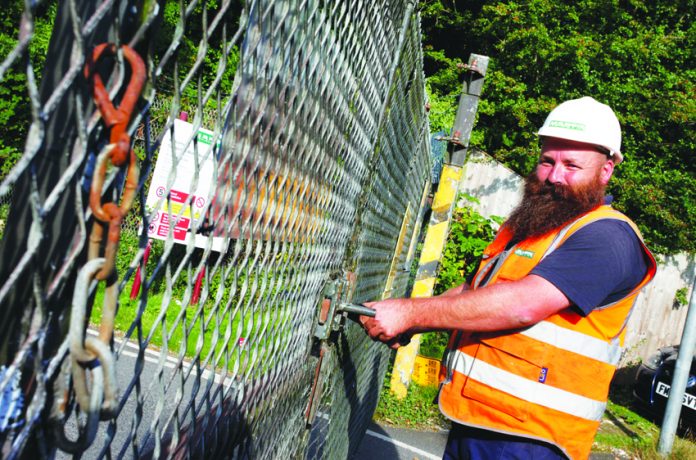 The gates closed for good at Congleton’s Barn Road tip at 5pm on Sunday.

Those using it one last time before they will have to drive to either Alsager or Macclesfield to use alternative sites were lamenting its loss, while showering praise on the site’s workers.

Despite Sunday’s fine weather, the tip had been relatively quiet until the last hour or so, staff said.

There was a steady stream of people arriving with boot loads of waste from 4pm, an hour before closure, and all those the Chronicle spoke to said they would miss the convenience of their local tip.

“The decision to close it, meaning we will have to travel to Macclesfield in future, was wrong – and all for a Costa drive-thru,” said Phil Edmondson of Edinburgh Road, Congleton.

Planning permission has already been given for a drive-through café.

Mr Edmonson was at the tip on Sunday with some carpet damaged after a water leak.

“I’m here to dump a carpet after a water leak at home and wanted to get back quick. I couldn’t have done that if I’d had to travel to Macclesfield,” he said.

Rob Wardle, of Brereton Heath, was dumping grass cuttings from three large bins he pulled from the back of his car.

“My alternative will be a 20-mile round trip to the tip in Middlewich in future,” he said.

“Congleton’s shouldn’t be closing as the town’s population is big enough to support it and is very convenient for everybody – and Congleton is a growing town.”

He added: “We are told to reduce our carbon footprint but the closure and the need to travel further to take our rubbish will only make it larger.”

Another visitor during the tip’s final hour was Chris Cooper of Swettenham.

He said: “The link road has made it a lot quicker for me to reach it. The Congleton tip is very convenient and in future I will have to consider using the one in Macclesfield, Middlewich or Crewe.”

He was full of praise for staff at the Barn Road site: “They’re great – they are helpful, useful and always made sure everything went in the right skip and kept it all in order.”

Roxanne Knyba lives in Holmes Chapel but uses Congleton’s tip as she used to live in the town.

While dropping off some wooden fencing, cardboard and kitchen chairs she said: “It’s wrong that the tip is closing, there’s so much new housing in the area, not just in Congleton.”

She hoped that the closure might make people think more about recycling adding: “People should recycle more and give items they would otherwise throw away a second chance. You can’t recycle things if you just throw things away. Give them to charity so they can help towards a good cause. We have to do something for the environment.”

One of the final visitors was Leila Boulakhras, who only moved to Congleton two months ago and was dropping off clothes, boxes and textiles.

She said: “To have no local tip will be very frustrating and having to go to Alsager or Macclesfield is not going to be very convenient.

“It’s a shame, we all pay council tax, and we should have a local tip.”

Brian Thomas, duty manager and his colleagues said a hello to most of the last day’s visitors.

His workmates had even put up a “beep for Brian” sign outside on the last day, and most people leaving the site duly obliged with a blast of the horn as they left.

Before closing the gates for the last time at 5pm on Sunday he said: “For the last couple of weeks we’ve been getting 200 visits as people panicked that it was closing.

“It’s going to be very weird here with no people pulling up, and when the skips go for the final time.”

One part time worker has lost their job as a result of the closure while the three other full-timer workers will be relocated to the council’s other tips.

The site was being cleared this week before the council’s lease expires and the site is returned to the landowner.

The council has decided not to build a replacement site in Congleton while the procurement process for a new contract for the running of the borough’s household waste recycling centres from 2023 is carried out.