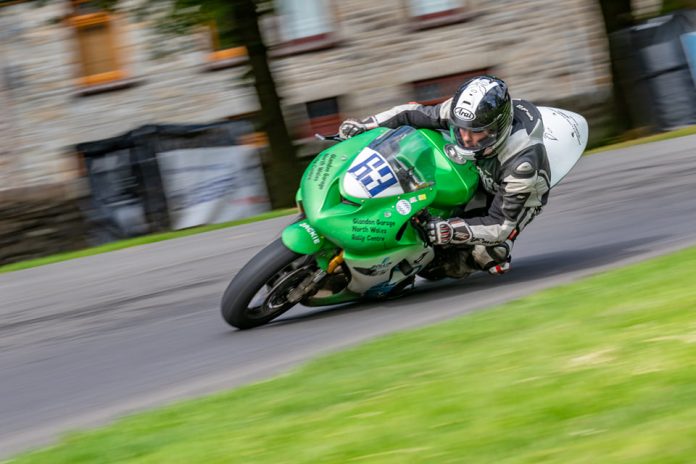 A bid by Goostrey-born biker Eddie Whitehurst to stay among the leaders in circuit and road racing has been given a boost from his first road race in the Aberdare Park event in mid-Wales.

Mr Whitehurst, who lives in Wilmslow with his wife, Emma, took part in the race for the first time after disappointment when the Oliver’s Mount Barry Sheene classic, near Scarborough, was cancelled (writes John Williams).

However, after being well positioned in the 600cc Park and Grand Welsh challenges during the two-day event, he lost his place in the finals when he came to grief on a hairpin bend and was forced to retire with his damaged 165mph Kawasaki.

He originally planned to retire this year unless he attracted more sponsorship but has been encouraged to carry on racing after generous donations from family and friends and his main sponsors Glandon Garage, North Wales, and Bollin Construction in Wilmslow.

But his experience at Aberdare Park has given him the experience and determination to press on next season to be first past the chequered flag.

The tough, tree-circuit is regarded as a stiff test for even the most experienced of riders with its narrow sections and steep bends.

Mr Whitehurst, a builder who is a member of North Gloucester Racing Club, has already repaired his powerful machine in preparation for his final race of this season with the club at the Pembrey circuit in Carmarthenshire.

“The race meeting at Abderdare Park was a great experience for my first ever road event and with thousands of spectators to watch made it just a great meeting,” he said.

“I got two fourth places in each of my categories which was no mean feat considering I was up against some TT stars and the Honda racing team.”

He added: “Unfortunately, I crashed out on a hairpin in the final of the Welsh open as I tried a different approach to overtake and had to retire because of damage to the machine.”

He said he will be definitely taking part in the same event next year.