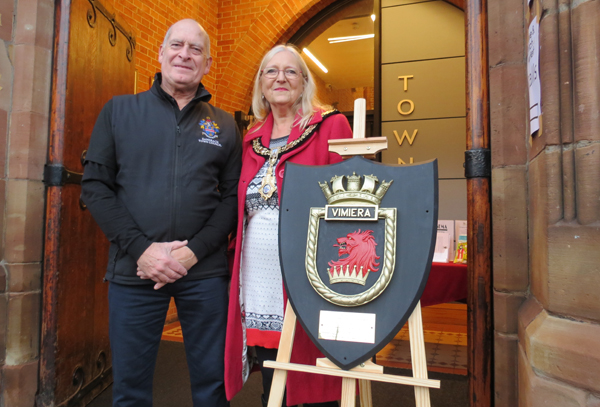 A caretaker was only two months into a new job in Sandbach when he uncovered the “tragic story” of a wartime treasure while rooting around in a dusty cupboard.

Steve Hyland, (67), had been encouraged by bosses at the town council to get familiar with the buildings he would be looking after, including the town hall, which is how he happened upon a plaque.

Displaying a golden crest with the word Vimiera engraved across the top, the black, gold and red plaque appeared to be a coat of arms and it sparked Mr Hyland’s curiosity.
He discovered, after immediate research, that the plaque was a reward for Sandbach’s war support activities during WWII.

It was part of a campaign known as Warship Week, a National Savings week in which cities, towns and villages throughout the country were given a target for money invested in the new Government savings scheme – effectively lending money to the Government to spend on the war. If it hit its target, a town would be allocated a naval vessel and its crew for adoption.

Local charities, churches and schools would then provide the crew of the adopted ship with gloves, woollen socks and balaclavas. Children would often write letters and send cards and officers and men from the adopted ship would visit the town.

Sandbach was given a target of £120,000 and managed to raise £163,880. In return for the monumental sum, the town was allocated a V-class destroyer, HMS Vimiera, as its adopted ship, and the former Sandbach Urban District Council was given the commemorative plaque.

Mr Hyland, who moved to the town from Edgworth near Bolton almost three years ago, explained: “When I found it, I had no idea what it was, but it was clearly of some importance because it is very heavy. It is actually quite well documented on the internet.

“Sadly, there is a very tragic story to this because, although the plaque was presented in September 1942, the ship that Sandbach sponsored was sunk earlier that year. It hit a mine in the Thames Estuary and 96 lives were lost.”

HMS Vimiera, a V-class destroyer, had been used before the war on a mission to promote negotiations as part of the Anglo-Soviet Trade Agreement in 1921, but was later chosen to be converted into an escort destroyer with anti-aircraft and anti-submarine capabilities.

It was just five weeks after the fundraising in Sandbach that the ship sunk.

Of the 96 who died, it is believed that more than 90 were sailors, while a further four of the 38 survivors later died as a result of their wounds. Eight out of nine officers survived and Vimiera’s commander, Lt Angus Alexander Mackenzie, was put in charge of another ship.

Mr Hyland continued: “There is no public memorial to the ship being sunk. There are individual memorials around the country with the names of some of the sailors who lost their lives, but there doesn’t exist a complete list with a memorial plaque.”

At a meeting of Sandbach Town Council on Wednesday, he gave a presentation about the plaque and subsequently proposed that it be displayed once again in the town hall. Couns were in agreement and Mr Hyland has announced plans for an unveiling ceremony to take place on 9th January – the 81st anniversary of the ship’s sinking.

Town mayor Coun Kathryn Flavell said: “I am looking forward to giving this plaque the prominence it deserves, and I am grateful to Steve for his enthusiasm and hard work which led to the discovery.”