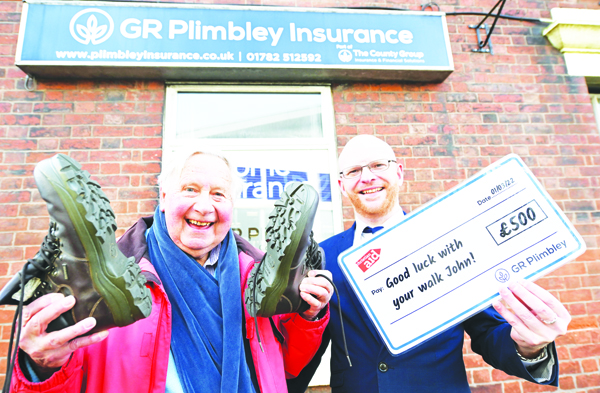 A Biddulph grandfather who has raised more than £1m for Christian Aid by organising sponsored walks has been presented with a cheque in recognition of his hard work over 30 years.

Retired science teacher John Bamford collected £500 from staff at GR Plimbley Insurance on Wharf Road, Biddulph, as he marched on with plans for the return of his annual charity trek in April.

Since 1991, Mr Bamford, (83), has been the driving force behind the North Staffordshire Christian Aid Committee, which stages the walk round Tittesworth Water, near Leek, each spring.

Hundreds of churchgoers from across Staffordshire and Cheshire take part each year and in 2019 the annual effort hit a £1m milestone raised for the charity.

Even during lockdown his supporters carried on regardless, holding individual walks to raise thousands for the charity.

Grandfather of three Mr Bamford said: “Tittesworth is a stunning backdrop for the walks, which take place with kind permission of Severn Trent Water.

“We are thrilled to be back again. Like so many events, the walk has been on hold for two years due to the pandemic so it will be great to meet up with regular walkers and new supporters on 2nd April.

“Even though we couldn’t walk as a group, people still did their own thing over the past two years, helping to raise a further £51,000, and to receive a cheque from GR Plimbley was lovely recognition of the effort put in by everyone.”

Mr Bamford, who received the MBE for his charity efforts in 2006, combines organising the walks with his joy of teaching.

He still passes on his knowledge of science subjects including maths, biology and physics to local youngsters as a private tutor.

In awarding him his MBE for his charity work, the Queen’s advice to Mr Bamford was to “keep it up”.

He said: “I’ve been a customer of GR Plimbley for many years and the staff are very friendly. Over the years the branch has made many donations to Christian Aid, but this was something special and very touching.”

GR Plimbley branch manager Matthew Wood said: “We are in awe of Mr Bamford’s commitment to raising money for Christian Aid and inspiring so many people to put their best foot forward each year. He’s a real credit to Biddulph.

“We have made several smaller donations to the charity over the years but decided to bump it up to give Mr Bamford and everyone involved a head start as they prepare for a triumphant return.”

Around 200 people from across Biddulph and Congleton, as well as Leek and the Potteries, take part in the walks, raising around £40,000 each year.

Each walker pays a donation to trek the full five miles round the water or a distance of their choice.

To join them this year, email the committee secretary on mwillmot@talktalk.net.

Walkers can also turn up on the day and register at the marquee near Tittesworth Water visitor centre. It will be open from 9.15am. The walk begins at 10am.