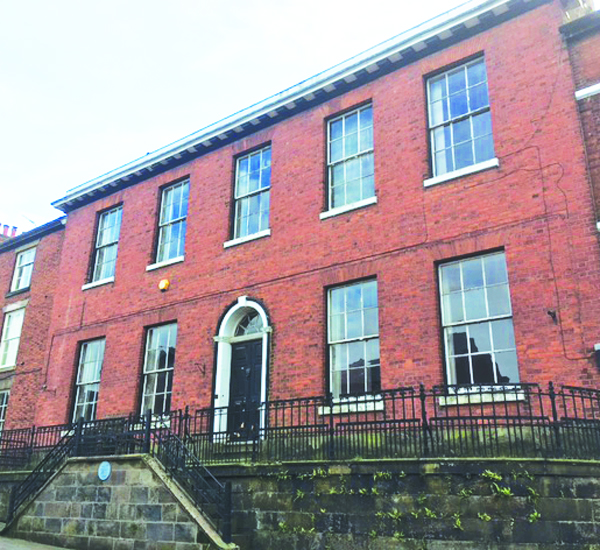 Congleton’s historic Bradshaw House could be given a new lease of life.

A planning application has been submitted to Cheshire East Council for change of use of the listed building at 21, Lawton Street, from what was a family day care centre to six one-bedroom supported living apartments.

The imposing building had lain empty for some years and an attempt was made by Congleton Museum to buy the property, once the home of Judge John Bradshaw, the man who ordered the execution of Charles I. Cheshire East declined to sell the building to the museum.

Now a planning application from Uttoxeter-based Kingsgate Development (Midlands) wants to use the building to provide individual apartments and facilities.

The application explains that supported living “offers people aged 16 and over with a wide range of needs including physical and learning disabilities, autism and mental health problems with the right care to enable them to lead independent lives”.

Staff will be present “as little or as much as required” by residents.

The statement explained how the proposals will maintain the existing internal division of the building. The main entrance lobby and central staircase will remain as the communal entrance, serving the majority of the apartments.

The ground floor will see the creation of two apartments, one either side of the central lobby. These two flats each consist of two main existing rooms with one room serving as an open kitchen living space and the other serving as a bedroom and shower room.

A maisonette-style flat will use a portion of the ground floor as an open kitchen living space, accessed from a private rear entrance. This apartment will have its own private staircase leading up to the bedroom and shower room on the first floor level.

A further two apartments and one maisonette will occupy the existing rooms on first floor, all accessed from the central staircase.

External work would involve the demolition and rebuilding of a single storey rear extension.

There will be no changes to the external appearance to the front of the building.

The statement concluded that the proposals “will have no negative affect” on either the building’s use and or appearance and there will be no changes to the building’s listed façade.

History
A heritage statement with the application gives an interesting snapshot of Bradshaw’s House in Congleton’s history.

In approximately 1270 Congleton passed to Henry de lacy, Baron of Halton, and subsequently formed part of the Barony of Halton and passed to the Duchy of Lancaster and later to the Crown. Henry de lacy conferred Congleton with a borough charter between 1272 and 1275 and the burgesses were allowed to form a merchant’s guild.

The newly founded borough thrived. Bradshaw House occupies a number of the original burgage (rental property, owned by a king or lord) plots that formed the medieval nucleus of the town.

The site also occupied Cole Hill House, which was a timber framed building, originally owned by Regicide, Judge John Bradshaw who was elected mayor in 1637-38 and High Steward in 1655. Bradshaw subsequently became president of the court that tried and ordered the execution of Charles I.

By the mid-18th century the house had become the home of John Sydebotham and in 1820 was part of a 61 acre estate, comprising of nine smaller houses, two farms and a water powered silk mill.

When William Loundes inherited the property, he constructed the dominating Georgian property known as Bradshaw House, which was the last Georgian merchant’s house to be built in the town.

During the mid-19th century the house was occupied by relatives of Sir Thomas Reade and at the end of the 19th century, in conjunction with the adjacent property, the house became one of the town’s medical practices.

Following the death of the doctor in 1939, the house became a wartime children’s nursery.

In more recent times the property was used as a council-run family day care centre.

The last date for submitting comments is 24th March with a decision target date of 20th April.