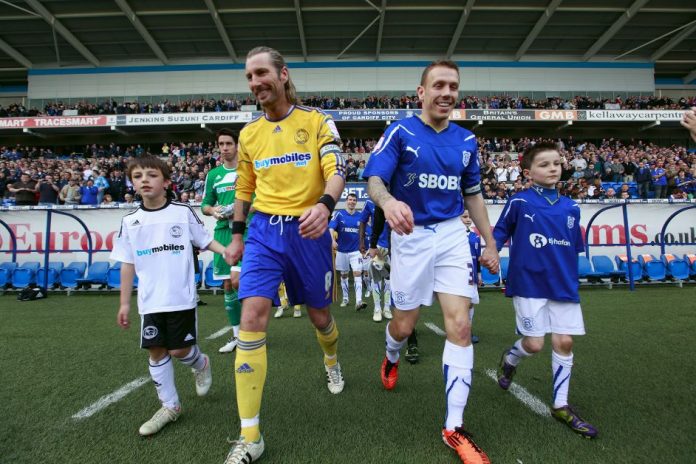 Footballer Robbie Savage has launched a new programme to give youngsters free access to football.

The former midfielder, who joined Crewe Alexandra after being released by Manchester United as a youth player, played for Leicester City, Birmingham City and Blackburn Rovers then joined Derby County, where he was later captain. He also won 39 caps for Wales.

Now he’s kicked off a new venture, The Savage Foundation, a community interest company that will help youngsters to access free grassroots football regardless of their background or ability, with the aim that no child should be disadvantaged.

Said Mr Savage, who is director of football at Macclesfield FC and runs a local youth team, said. “My heartfelt desire is for my foundation to help every child experience the enjoyment and benefits that being active can bring – increase their confidence and promote the importance of both their physical and mental wellbeing.”

The foundation is developing partnerships with The Law Family Charitable Foundation and Macclesfield FC.

Starting in March, every Tuesday between 4pm-6.30pm, any child from within the Macclesfield and district area, aged 5-12 will be able to apply to enjoy free coaching sessions at Macclesfield Football Club, delivered by dedicated volunteer coaches.

Players will also have the opportunity to attend educational classes and homework clubs, while also being given the chance to compete in a new Saturday Community League which is set to launch later this year.

They will play under the banner of The Savage Foundation and will be provided – free of any charge – with their own kit to wear.

Any youngster who participates will also receive a complimentary ticket to watch the Macclesfield FC in action.

Mr Savage said: “The ability to bring my dream to reality has only been made possible by the generosity of support from Macclesfield FC owner Rob Smethurst, giving up club facilities that would have otherwise been available for commercial opportunity, as well as the enormous goodwill and generosity of Andrew Law on behalf of the Law Family Charitable Foundation, who have provided an initial three-year seed funding donation – for kits, coaching and equipment; placing their trust in the foundation to deliver on its promises.

“I cannot find enough words to express how grateful I am to both our founding partners and our associates.”

Mr Law said: “As we finally emerge from the covid-19 lockdowns, inspiring everyone to re-engage in sport is essential, and this initiative will bring really exciting prospects for so many.

“The foundation’s ethos of ‘levelling the playing field’ is one we firmly support. We believe that everyone should have equal opportunities regardless of background. With Robbie’s passion and drive, it’s clear we have a unique opportunity to change young people’s lives for the better.”

Phil Smith, Sport England’s director of sport, said: “Grassroots football has the power to change people’s lives by bringing communities together and improving the health of the nation.

“By providing opportunities for youngsters to play the game, regardless of background, the Savage Foundation will have a really positive impact on young people, sharing the same synergies with our own strategy to deliver the game for all.”

Mr Smethurst commented: “Through The Savage Foundation, Macclesfield FC really will become the place to be for all local youngsters who want to develop their footballing skills in a safe and secure environment, while creating strong friendship networks.

It doesn’t stop here – my wider vision is to create a sustainable model that can be replicated across wider UK football clubs and communities.”